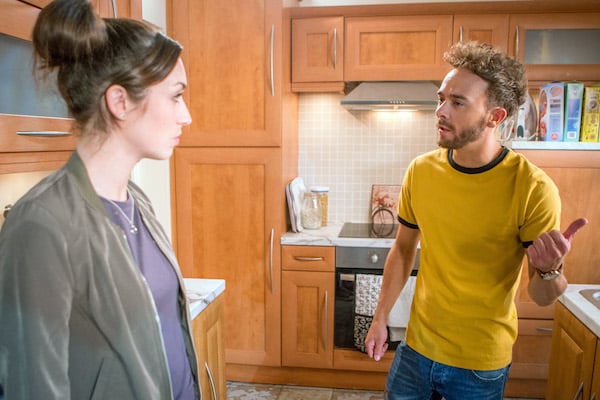 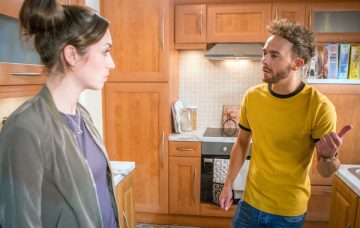 Shona Ramsey gets an almighty shock next week when she finds little Lily playing with a flick-knife.

After taking the knife off of the little girl the cafe worker gets an even bigger shock when Lily tells her she found it in David’s jacket pocket.

Shona is concerned that David feels so unsafe he’s carrying a knife around with him.

She pulls him aside and questions him about it later, telling him that carrying a knife is dangerous and stupid and he should not doing it.

An angry David snaps back by making a jibe about Shona’s son Clayton who is currently in prison for stabbing David’s wife Kylie to death two years ago.

Later David comes back home and apologises and assures Shona he’s thrown the weapon away. Is he telling the truth?

It’s no surprise that David feels he needs to protect himself as he’s still suffering the after-effects of being raped by Josh Tucker earlier this year.

Josh – who worked at the garage and groomed David by pretending to be his friend – spiked the hairdresser’s drink and raped him after a lads’ night out back in March.

David has struggled with his mental health since then, keeping quiet about the attack until Aidan Connor’s suicide in May.

With Shona’s support he reported Josh to the police but – with lack of evidence – the twisted character was released without charge.

He then fled the cobbles while David confessed to his family what had happened to him.

Back in May Kate said that Josh wouldn’t be going to prison for the attack because she wanted the storyline to reflect real life and convictions in cases like David’s are sadly very low.

She told Metro.co.uk: “I think it’s important not to artificially tie things up – I believe that David’s perpetrator wouldn’t be convicted in this instance.

“David got rid of all of the evidence.

“We will have to tie the storyline off – it will find an ending which will surprise people.

“David will get a catharsis and some acknowledgement but he might not get that legally.

“In soap, a lot of the justice often comes from the community – Phil Collinson used to call it the court of Coronation Street and I completely get that.”

It was recently reported that David will team up with local vicar Billy Mayhew to seek justice for the hairdresser.

The pair find him in a pub, where he appears to be targeting another victim.

The mechanic, who has been released from police custody, is seen chatting to a male in the canalside watering-hole.

As David (Jack P Shepherd) watches from afar, the scenes are all too familiar to the night when Josh drugged and raped him.

How do you think Josh should be punished?Leave us a comment on our Facebook page @EntertainmentDailyFix and let us know what you think!