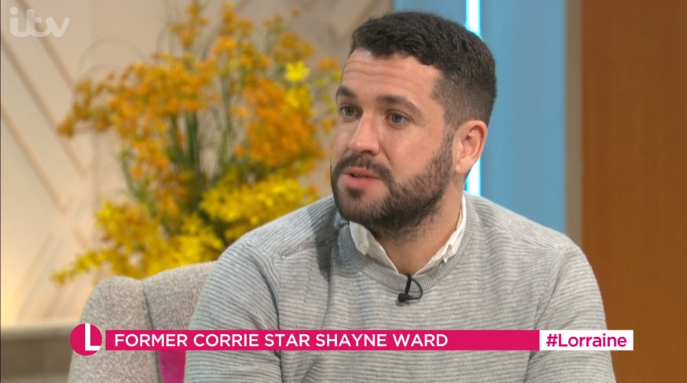 It touched many people

Shayne Ward is still “inundated” with “incredible messages” from men who thank him for playing out a male suicide storyline in Coronation Street.

The former cobbles favourite bowed out of the soap in May 2018 when his character Aidan Connor took his own life, and the 35-year-old star admitted just recently a guy came up to him and thanked him for the plot.

He said: “We had to tackle a scary taboo that us guys do not talk, and we’re still not talking.

“I still get inundated with incredible messages of bravery from a lot of men saying thank you. Not just to myself but the whole team as a collective.

“I gave a hug to a guy in a shopping centre recently.

“I was just paying for something and he said his mum was a fan and then he just put out his hand and I knew what he was doing.

“He just said, ‘I want to say thank you, because I was in that place last year.’

“And he’s in an amazing place now.”

Shayne admits he still thinks fondly about his time on Corrie, and recently looked over at the set “like an ex”.

Speaking on ‘Lorraine’, he added: “I was over in Manchester in MediaCity and I was looking at Corrie like an ex, and I was like, ‘Hello, once in love. Still in love.’ ”

Shayne recently admitted he was only invited to audition for Coronation Street after fans thought he had signed up for the soap when Sean Ward joined the cast.

Supporters created some “hype” when they mistakenly started congratulating Shayne for landing the role of Callum Logan, when it was in fact Sean who had got the part.

He said: “You’ll remember a bad boy in it called Callum, who the Platts killed.

“A lot of people were messaging me on social media saying, ‘Congratulations on getting the role of Callum.’

“I thought, ‘I’ve got nothing to do with the show.’ Then I clicked on that Callum’s real name was Sean Ward.

“Because of that and the little bit of hype, ‘Coronation Street’ contacted my management and said, ‘We would like Shayne to come in for an audition, how would he feel?’

“That was my very first TV role. The only acting I did before that was a show called Rock of Ages.”