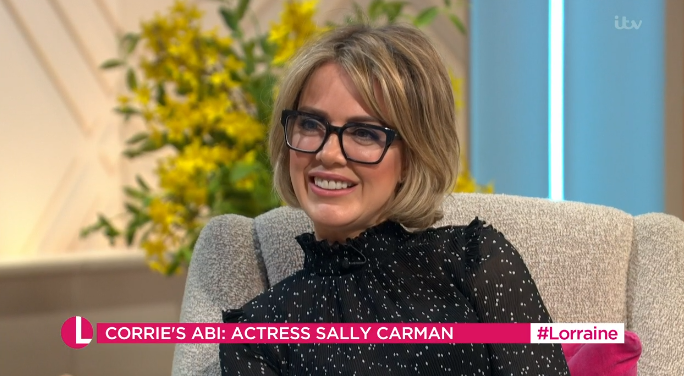 He's too 'twinkly' for her

Sally Carman says it is “just as well” she doesn’t have many scenes with her boyfriend and Coronation Street co-star Joe Duttine.

The former Shameless star hooked up with her fellow cobbles resident – who plays Tim Metcalfe on the ITV soap – last year, but Sally is glad her Corrie character Abi Franklin doesn’t speak to Tim much on the show because he “twinkles on set” and she isn’t sure she could get through the scenes.

But the 38-year-old star admits it can get confusing on the set because Tim’s wife Sally Metcalfe is played by Sally Dynevor, whose real-life husband is also called Tim.

One of the reasons the former Silent Witness star wanted to get into acting was because of cobbles legend Barbara Knox (Rita Tanner), and the soap stalwart was “so gracious” when she told her that.

Speaking on Lorraine, she added: “She was one of the reasons I wanted to become an actor.

“I remember as a child watching her and the hairs on the back of my neck stood up with the whole Alan Bradley storyline.

“When I met her I said, ‘You’re one of the reasons I became an actor,’ and she was so gracious, and she said, ‘This is the best job, you’ll have a good time on this, it’s wonderful, and we’re all very lucky.’

“And I thought, ‘You’re absolutely right.’ I feel so lucky.”

Sally recently revealed she had 10 screen tests and “about a million interviews” for Coronation Street over 14 years until she finally joined the soap.

She said: “I acted with Julie Hesmondhalgh [Hayley Cropper] on a radio play a while back, and I didn’t know I’d be in Corrie years after that.