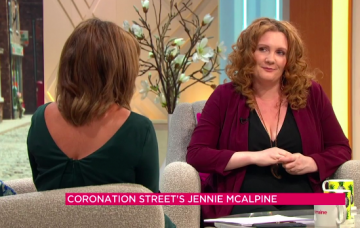 You won't believe the objects they've been using...

Coronation Street fave Jennie McAlpine has revealed the amusing ways in which she’s had to hide her growing baby bump on set.

The pregnant actress, 34, is expecting her second child, but her character Fiz Brown isn’t…

So they’ve had to come up with desperate measures to conceal her belly – even using a CAR during one scene!

She told the host: “I’m going to tell you how we hid it. First with a mug like this, then we went on to a handbag. But, do you know what, last week they hid it with a Ford Fiesta.

Jennie’s interview comes as she prepares to head off on maternity leave in a few weeks.

She also confirmed recent reports that her beloved soap character will be driven out of Weatherfield by Tyrone’s grandmother.

Battleaxe Evelyn Plummer made her debut this week, and is set to make Fiz’s life hell.

Asked if Fiz will be coming back, Jennie confirmed she WILL be, joking: “Yeah, well so far – I haven’t read any scripts where I die!”

Jennie also revealed how her son Albert responded when he found out he would be getting a little brother or sister.

“Yeah, he was a little bit excited,” she said. “He’s like you – bored of waiting. Because everyone I speak to [is like] ‘Have you had that baby yet?’ No, no.”

Fiz’s exit scenes will air in the autumn.