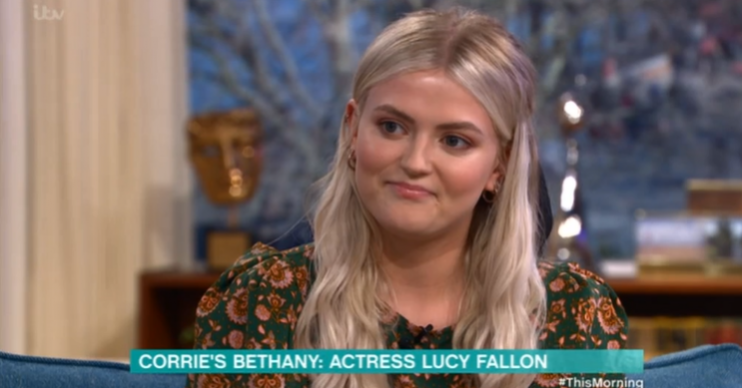 The actress leaves the cobbles tonight

Lucy Fallon’s mum wanted her to remain on Coronation Street.

The 24-year-old star has filmed her final scenes as Bethany Platt, and the ITV soap will air them tonight (Wednesday March 4).

She has now admitted her mother wasn’t keen on her daughter departing Weatherfield because she was concerned Lucy may “might never work again”.

Speaking on This Morning, Lucy said: “I don’t think she was very happy, really. She wanted to me to stay.”

Her mum then said: “It’s more for the security.”

Lucy said: “As a mum she probably worries about me. The fact I might not get another job, I might never work again.”

But the star admitted her decision to depart the cobbles had a “now or never” feel about it.

She added: “Corrie was my first job. I was at sixth form before Corrie. I’ve not done anything else.

“And it got to the point where I’ve been there for five years and had loads of amazing storylines, and it was now or never.

“I didn’t want to get so far down the line and look back and think, ‘I wish I’d gone and tried other things.’

Lucy recently admitted she was “too scared” to leave her dressing room for the first six months of her Coronation Street career.

She told Metro: “I had no idea what direction life was going to take me in. I didn’t get into the drama schools I’d applied for.

“I auditioned for Corrie, but somebody else was offered the part of Bethany first and then I ended up getting it.

“I was 19 and it took me six months to come out of my dressing room – I was too scared to speak to anyone.

“Never in a million years back then did I think I’d end up calling Gail Platt a friend!”

Bethany’s exit will see her depart for a magazine internship in London, but will she leave with boyfriend Daniel Osbourne?

Or will she finally realise he isn’t over late wife Sinead and needs some time alone to grieve?