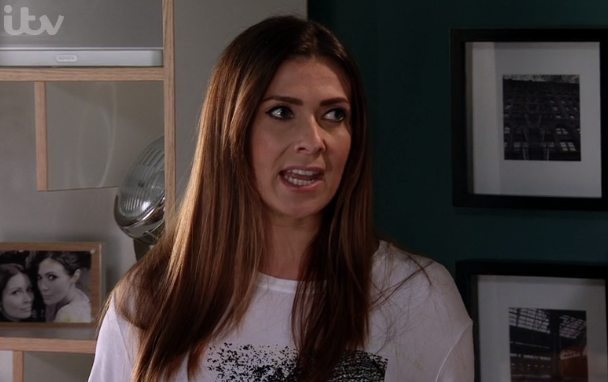 She's just had an epic showdown with Robert at the altar

Michelle Connor will depart Coronation Street this Christmas, but not before she’s settled a few scores.

After plotting her revenge on cheating Robert Preston after discovering he’d got Vicky Jefferies pregnant and then ended up engaged to both women, Michelle got her moment tonight (Wednesday December 4).

She had already tricked Robert into signing over the Bistro to her and then when he got to the altar to say ‘I do’ he was stunned as Michelle read out her vows.

Instead of a heartfelt, saccharine offering, Michelle read out his texts with Vicky, exposing Robert and his lies.

She later told her family she was selling up the Bistro and moving away for a fresh start.

Actress Kym Marsh told ED! and other media about the epic wedding showdown, saying: “It’s brilliant and he deserves it.

“When I read the scripts, I was like that is great. It’s the biggest bitchy thing she could ever possibly do. With a reason, he has been hiding stuff from her for a long time.

“And it’s not the first time he’s lied to her. I think this was the last straw for her. This for her is the ultimate betrayal.

“He also tried to use Ruairi in his lies, and she’s like ‘no, you deserve this’.”

With Michelle’s time on the Street coming to an end, she puts the Bistro on the market and ends up selling to a mystery buyer – who turns out to be Ray!

“She’s furious about that,” Kym revealed.

“She doesn’t take the news very well and contemplates trying to change things but it’s too late.

“For her it’s everything mounting up. The events of Christmas day, and everything afterwards.

“She’s in a bad place at that point.”

So she disappears from Weatherfield and leaves Ray in charge.

And Kym revealed the last scene she filmed was in the Rovers with the Connor clan.

“My final scene was in the Rovers with the Connors, but it was out of sequence as Michelle leaves in a taxi.”