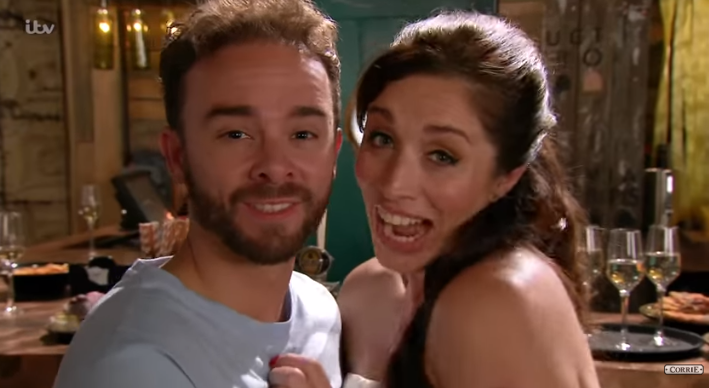 Viewers are worried she will be killed off

Julia Goulding has confirmed her exit from Coronation Street amid confusion at how Shona Ramsey will leave the cobbles.

Actress Julia has played Shona for two years but will be taking a break to have her first child with husband Ben Silver.

After months of having to hide her growing bump behind a variety of objects while filming, Julia will be given a break from carrying giant cushions around.

Her co-star Jane Danson has posted to wish her a happy maternity leave as she leaves filming behind for a while.

Julia replied: “Awww thanks, love you Jane! Thanks for looking after me in the lead up.”

The actress announced her pregnancy earlier this year writing: “Ben and I are delighted to announce that we are expecting our first baby at the end of this year!

“We are absolutely overjoyed and can’t wait to meet our little one!”

She also revealed she had signed a one year extension on her Corrie contract meaning she will return to the soap after her maternity leave.

On screen Julia’s character Shona has been put through the ringer of late but finally got a bit of happiness when David Platt was released from prison and they got married.

The couple tied the knot in the Bistro after months of uncertainty with their family.

But with their happiness so set for a while, fans are confused at how and why Shona will leave the cobbles in the coming weeks.

One said: “How the hell does Shona leave then. Another death? I bet it’s Gary….. LOL #corrie”

Another added: “Such a lovely wedding and happy moment for David and Shona but the question now is how Shona leave the street!! #CoronationStreet #Corrie @itvcorrie”

How do you think Shona will leave? Leave us a comment on our Facebook page @EntertainmentDailyFix and let us know what you think!