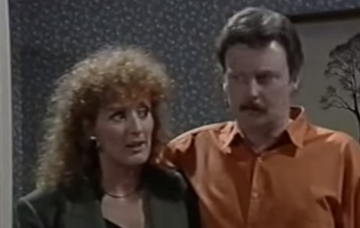 What a troubling story

Hold onto the sofa, this bit of Coronation Street gossip might just knock you sideways.

According to a report in The Sun today, Jim McDonald will return to Weatherfield later this summer with a glamorous young woman.

No, he’s not picked up one of those ladies who like to write to prisoners… the lass in question is, apparently, his daughter. His daughter with LIZ.

Corrie fans of a certain age will remember a particularly harrowing storyline in 1992, in which the McDonalds lost their baby daughter after she was born prematurely.

Liz went into labour early, after Steve went missing, and little Katie died a day after being born.

Liz has mentioned her daughter from time to time, notably when Steve’s wife Becky suffered a miscarriage, and when Michelle Connor  lost Ruari.

Now it seems that Katie didn’t die after all, and there was an unfortunate mix-up at the hospital.

Katie, meanwhile, was adopted and raised in Australia.

She decided to seek out her real parents once she became an adult, and traced Jim through his military records.

According to The Sun’s source: “They’ve cleverly cast the role of Jim and Liz’s daughter to a beautiful woman in the hope of making her the street’s new resident fox.

Jim has been languishing in prison for the past seven years, serving time for his armed robbery of the local building society

Ent Daily has contacted a Corrie rep, who won’t comment on speculative storylines.

What do you think of this rumoured plot? Leave us a comment on our Facebook page @EntertainmentDailyFix and let us know what you think!