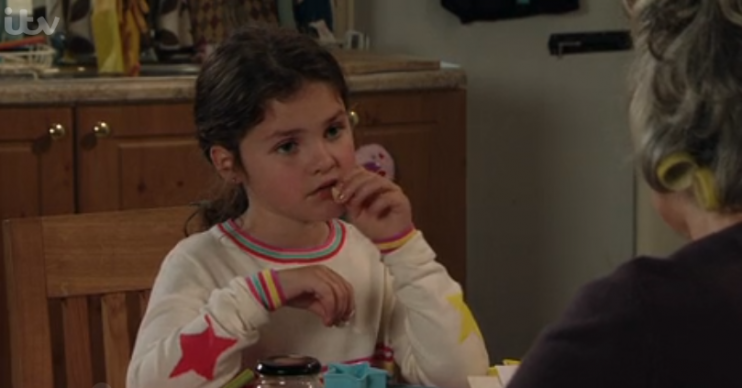 Hope is currently at the centre of a storyline

Isabella Flanagan, who plays Hope Stape in Coronation Street, looks overjoyed in a behind-the-scenes picture from the soap.

She captioned the post: “Hope’s back at school but still causing drama!”

One wrote: “Love all the drama she causes.”

A second commented: “Such a great little actress.”

A third said: “Aw bless her! I’m loving the storyline at the moment.”

What drama is Hope causing?

Currently Isabella’s alter ego is at the centre of a big storyline and recently discovered her live-in tutor Jade is actually her big sister.

Last year it was revealed the woman Hope’s mum Fiz had hired to homeschool Hope is actually the daughter of Fiz’s late husband John Stape, making her Hope’s half-sister.

Jade has been out to get Fiz and got Hope to lie about her fractured arm, making it look like her mum abuses her.

In last night’s episode of the soap (January 6 2020), Jade made an appointment with Dr Gaddas and told them that Fiz has been hurting Hope, showing her pictures of bruises on Hope’s arm.

However, Jade painted the bruises on her sister’s arm when they were ‘playing doctors’.

Read More: Former Coronation Street star Katie McGlynn reveals she passed out between pantomime shows and ended up in hospital

With the investigation ongoing, Hope, along with her stepsister Ruby are having to stay at Kevin Webster’s house.

Will Fiz and Tyrone be able to prove they didn’t hurt Hope?