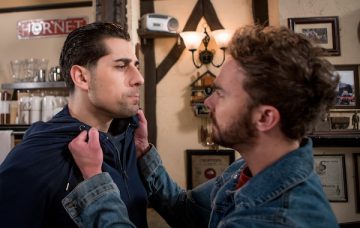 Huge showdown on the cards for Coronation Street’s David and Josh?

There's a secret just waiting to be unearthed

Coronation Street’s Josh Tucker is currently recovering in hospital after his brutal beating, with vicar Billy Mayhew still feeling guilty about the part he played in the rapist’s attack.

But with Bethany Platt about to find out that Billy has been visiting her uncle’s attacker this week, it’s surely only a matter of time before David himself finds out what’s been going on?

Thinking that Billy is back on drugs after spotting him handing money over to a homeless man, Bethany decides to follow the former addict and see what he’s up to.

But she soon discovers she’s jumped to the wrong conclusion entirely when she follows Billy to the hospital and sees he’s visiting a patient.

But there’s a shock in store when it becomes apparent Billy is visiting Josh, leading to Bethany demanding some answers.

Billy explains what happened with Josh and how he feels responsible for the fact he’s now lying in a hospital bed after losing his sight.

But despite Bethany reluctantly promising that she will keep the secret safe as long as Billy stops going to see Josh, will she keep to her word?

Until his attack, Josh showed no remorse for what he’d done to David, even mocking him at every given chance following the sexual assault.

But now that he is blind, Josh has come to rely on Billy more than he would like.

Actor Ryan Clayton told Metro.co.uk: “When you’re a villain, the clock is always ticking. Josh will always consider himself the victim and protest his innocence – he won’t accept what he actually did to David.

“Perhaps his punishment has already begun, with the blindness he has suffered after being attacked, but there’s still a long way to go.”

But what will happen when the inevitable happens and David find’s out that Billy has been secretly visiting the man who turned his life upside down?

This is a soap after all, and nothing stays hidden for long.

Could he take his anger out on Billy? Or will Josh be the one to bear the brunt?

However he discovers the truth about the vicar’s hospital visits, there’s bound to be one hell of a showdown when he does.

How do you think David will feel if he unearths Billy’s secret? Leave us a comment on our Facebook page @EntertainmentDailyFix and let us know what you think!