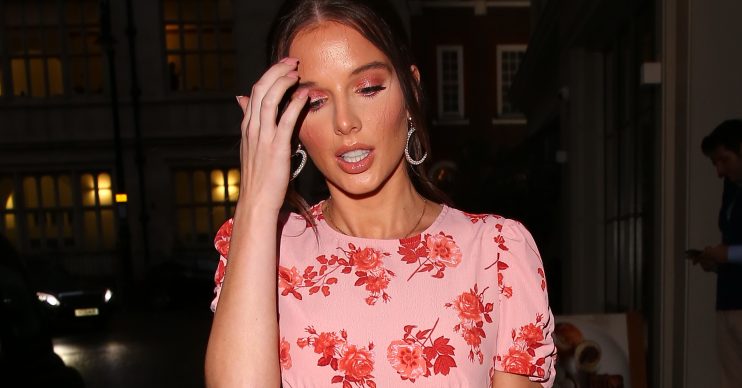 Fans were worried about her relationship with Scott Sinclair

Bemused Coronation Street star Helen Flanagan has been forced to reassure her army of followers after posing for a sultry new photo with a mystery man.

Helen, 29, is happily engaged to professional footballer Scott Sinclair and has two daughters with him, but some fans were sent into a spin when she shared a recent picture.

In the selfie, the actress – who is currently on a break from Corrie – is wearing a very low-cut denim outfit, sporting smokey eye make-up and has her brunette hair loose.

The man, called Jay, almost appears to coordinate in a denim shirt and the pair are touching heads.

But after receiving a comment saying: “This isn’t Scotty”, 29-year-old Helen was quick to set the record straight.

She replied: “It’s my best mate and he doesn’t fancy me [crying with laughter emoji].”

Helen has been in a relationship with Scott since 2009 and they have two children together, four-year-old Matilda and Delilah, one.

In May 2018, the couple got engaged after the romantic sportsman got down on one knee in front of the fairytale castle at Disneyland Paris.

But as Scott plays for Celtic, the family live in Glasgow and this has proved difficult when trying to juggle Helen’s own career.

Helen left Coronation Street as Rosie Webster in April 2018 to go on maternity leave and a return date is yet to be confirmed by both herself and ITV.

Speaking on Lorraine in May, she admitted: “I miss Coronation Street so much and I’m definitely going to go back.

“But it’s just working it around my days. Matilda’s at that age when she’s four and she needs to be taken to all of her lessons and what have you.

“And obviously me living in Scotland, it’s a four-hour drive and Delilah’s nearly one.”