The actress, 42, posted a stunning black and white picture of her baby boy, Jasper, fast asleep and cradled in her arms.

Clearly feeling the understandable frustrations of lacking sleep as a new mum she posted a funny caption.

She wrote: "Oh NOW he sleeps! My hair's been in that bun for the best part of two weeks."

Several of her Corrie castmates, past and present, couldn't resist posting their well wishes.

Oh NOW he sleeps! 🤪 (my hairs been in that bun for the best part of 2 weeks!) 😂 pic.twitter.com/hDlQwc20gZ

Hayley gave birth to her first child last month, after being told by doctors that she would never be able to conceive naturally.

She announced the birth on October 14, tweeting: "He's here. He's incredible. And we are besotted."

Sharing her pregnancy news in April, she opened up about how she feared she would never have children.

She tweeted at the time: "EXCITING NEWS TWEET! I'm so pleased to tell you all... I’m expecting my first child with my wonderful boyfriend Adrian!!

I’m expecting my first child with my wonderful boyfriend Adrian!! 👶🏻
I’ve always wanted to be a mum and didn’t think I could have children. And now, at the ripe old age of 42 - I’M PREGNANT!
We couldn’t be happier. 💖 pic.twitter.com/aclbXzhpTy

"I've always wanted to be a mum and didn't think I could have children. And now, at the ripe old age of 42 - I'M PREGNANT! We couldn't be happier."

Opening up on Lorraine while carrying Jasper, she told host Lorraine Kelly about her fertility issues.

She said: "I found myself single and I'm 40 years old thinking, 'Well that's my time gone. Be ok with it.' 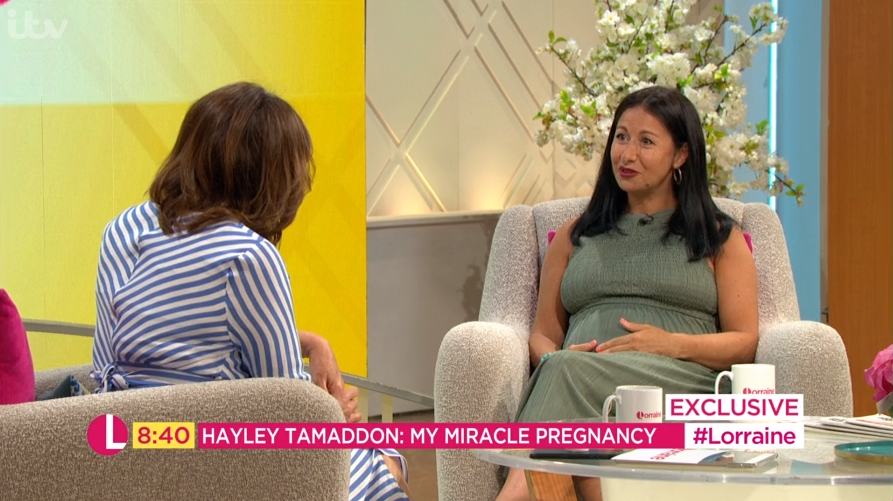 Hayley spoke about her pregnancy on Lorraine (Credit: ITV)

"I've read there's only a five percent chance after 40, per month, that a woman can get pregnant and the risk of miscarriage increases massively.

"Sadly we did go through that, but what that taught me was I could get pregnant, I can do it."

What do you think of the picture? Share your thoughts with us on our Facebook page @EntertainmentDailyFix.