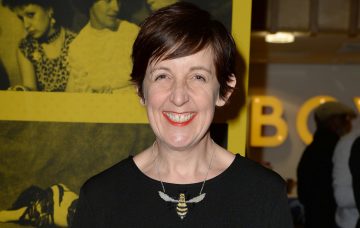 Julie Hesmondhalgh is set to appear in Doctor Who episode Kerblam alongside comedian Lee Mack.

The BBC have confirmed that the former Coronation Street actress and the Would I Lie to You? comedian will guest star in the upcoming episode, which will kick off when a mysterious message arrives in a package addressed to the titular Time Lord – played by Jodie Whittaker.

Read more: Fans are furious over decision to bump Doctor Who special from Christmas Day

The seventh episode – which is written by Pete McTighe and directed by Jennifer Perrott – will see the Doctor, Graham O’Brien (Bradley Walsh), Yaz Khan (Mandip Gill) and Ryan Sinclair (Tosin Cole) investigate the warehouse moon orbiting Kandoka and the home of the galaxy’s largest retailer, Kerblam!

The BBC has also confirmed the eighth episode is called The Witchfinders, which will see the space and time travelling gang’s arrival in 17th century Lancashire, where they will be embroiled in a witch trial run by a local landowner.

The intense ep – which features the arrival of King James I – will lead the Doctor, Ryan, Graham and Yaz to discover that something even more dangerous is threatening the safety of the people of Bilehurst Cragg.

Lee opened up about his own guest appearance earlier this year, admitting he “harassed” showrunner Chris Chibnall for a part in the show.

Speaking on Radio 4’s Loose Ends, he said: “I am blink-and-you’ll-miss-it. It’s just a little thing. I’ve just been a fan all my life, so I just harassed them until they gave me a little part in it.

Read more: Bradley Walsh’s fans to face conflict as Doctor Who and The Chase clash

“I even sent Chris, who runs the show, Chris Chibnall, a video of me getting out of my own TARDIS, which I own. With a Dalek, which I own as well. And I said ‘Come on, give me a part!'”

“And he said ‘Alright!’ So that’s what you need to do if you want a part in something. Just send a video to someone, you’ll get the part.”

Meanwhile, Julie left Coronation Street in 2016 in a heartbreaking storyline in which her character Hayley Cropper, suffering from terminal cancer, killed herself.

Do you enjoy watching Doctor Who? Leave us a comment on our Facebook page @EntertainmentDailyFix and let us know what you think!