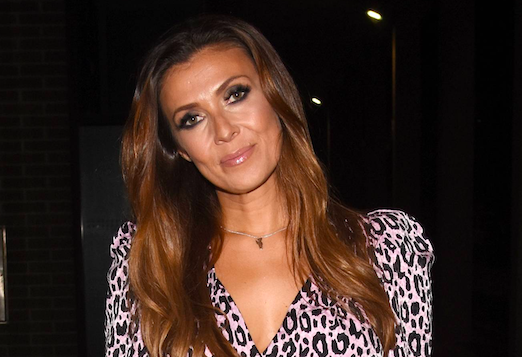 He's in the army

The actress, 43, got to spend some rare time together with her beau, who is often away with the army.

He’s back!!!!!!!……..only for a short while sadly, but gonna make the most of the time we have before he goes on his travels again! Missed his face so much!!! ❤️❤️

Clearly thrilled to be reunited with her army major boyfriend, Kym shared a loved-up photo with her Instagram fans.

In the picture, the pair are enjoying a Champagne bellini in a fancy-looking restaurant.

Going to make the most of the time we have before he goes on his travels again!

And, in a cute moment of synchronicity, the pair both appear to be wearing black!

Alongside the photo, Kym gushed: “He’s back!!!!!!! Only for a short while sadly, but gonna make the most of the time we have before he goes on his travels again! Missed his face so much!!”

Fans showed their support, with one replying: “Your smile is everything.”

Another said: “Lovely to see you two back together, much love.”

A third added: “Happy couple! It’s hard when you’re in the forces leaving loved ones.”

“Such precious times!” said one more. “I hope you both have a lovely time together.”

Kym has previously opened up about the “stress” of Scott’s job, telling The Sun last October: “It is always stressful when he goes away. There may not be an actual war threat currently, but there’s always a risk when you’re in these dangerous places.”

Kym and Scott – who is 11 years her junior and a major in the Parachute Regiment – have been dating since July 2018, following her split with personal trainer Matt Baker.

Take me back to summer!!!! @sallyrowemua ❤️

Kym has previously been engaged to personal trainer Dan Hooper, and has been married and divorced twice, to former EastEnders star Jack Ryder and Hollyoaks‘ Jamie Lomas.

Since leaving Corrie at the end of last year after 13 years on the ITV soap, Kym has appeared in the theatre production of Elf, and has been spending as much time as possible with her grandson Teddy.

She’s also playing the role of Luke Goss’ wife in an upcoming film.