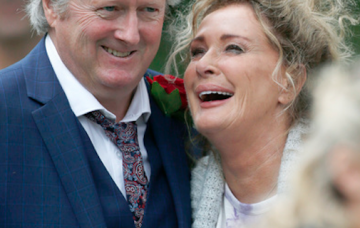 SPOILER PICS - Katie 'died' shortly after being born prematurely in 1992

Soap favourite Charles Lawson has been spotted filming scenes for the ITV soap with his onscreen ex Beverley Callard – and they’ve been joined by their long-lost Corrie daughter.

Played by Aussie actress Hannah Ellis Ryan, Katie McDonald was believed to have died shortly after being born prematurely on New Year’s Day in 1992.

And despite having held a funeral for the tragic tot over 26 years ago, she will soon dramatically turn up in Weatherfield alongside dad Jim when the ex con returns to the Street himself.

These new photos taken during filming at a Manchester graveyard show Hannah as Katie for the first time.

Read more: New twist in Jim McDonald’s return to Corrie has been revealed

Looking dressed more for a wedding than a funeral, Hannah wore a striking yellow dress for filming.

Charles meanwhile was looking uncharacteristically smart as Jim in a blue suit with a matching waistcoat and a flower in his buttonhole.

Corrie legend Beverley was also on hand for the scenes – as was Richard Hawley as Johnny Connor, her character’s recent lover, who it appears will also share screen time with Charles.

But could the fallout from this bombshell bring Liz and Jim back together, despite her recent fling with Johnny?

The Sun claims Steve – who has got wed a whopping six times on the soap – will use a fire at their wedding venue, a castle, as a reason to put their nuptials on hold.

Read: Why Jim McDonald’s return to Corrie with ‘dead’ daughter is wrong

Alternatively, he could use the excuse of his infant sister coming back from the dead.

That seems substantial enough to postpone a marriage ceremony, too.

What do you make to Katie being found to have survived all those years ago? Let us know what you think by leaving us a comment on our Facebook page @EntertainmentDailyFix!