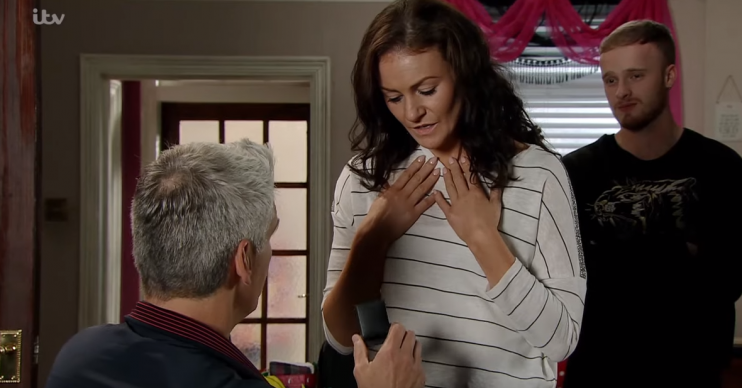 Vicky is pregnant with Robert's baby!

Fed up Coronation Street viewers have branded Robert Preston a ‘snake’ as he proposed to his pregnant ex-girlfriend Vicky Jefferies with his fiancée Michelle’s ring.

Over the last few weeks Robert has been leading a double life.

The chef found out his ex-girlfriend Vicky was pregnant with his baby just moments before he proposed to his girlfriend Michelle, who he had recently got back together with.

Robert and Michelle broke up the first time because he wanted another baby, but Michelle didn’t want another child after the death of her baby son Ruairi.

After Ruairi was born prematurely, Michelle found out her husband at the time, Steve McDonald, had fathered a baby with her friend Leanne Battersby.

However in last night’s episode of Corrie (August 14 2019), Robert’s web of lies got even more tangled.

Vicky’s son Tyler rang Robert to tell him Vicky planned for them to move back to Ireland to be with her ex-boyfriend, Jed, who is Tyler’s father.

Robert rushed round to the house begging Vicky not to leave, but she soon threw him out, fed up of feeling like his dirty little secret.

Unluckily for Robert, he dropped Michelle’s engagement ring, which he was meant to be getting resized.

Tyler soon found the ring on Vicky’s floor and obviously came to the conclusion that Robert had planned to propose to Vicky.

Vicky went after him and he ended up popping the question – with Michelle’s ring.

Viewers have branded Robert a ‘snake’ for not being honest.

Many viewers are just fed up of the storyline altogether.

They begged Corrie to resolve it as soon as possible.

When's Robert gonna get found out , getting boring now #corrie

This whole love triangle involving Robert is really getting on my nerves. I just want Michelle and Vicky to find out the silver fox is a wrong ‘un. Then we can expect to see some fireworks!! #Corrie