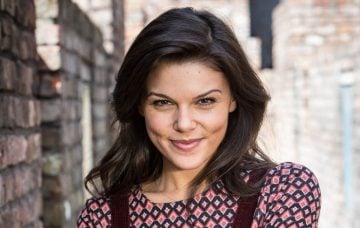 She has played Kate since 2015

The 31-year-old actress, who recently landed a part in pantomime Snow White and the Seven Dwarfs, will depart the ITV soap’s Manchester studios for the last time this week after four years of playing Kate Connor, and she is said to be planning to move to London to take to the stage in theatre productions.

A source said: “It’s an exciting and really emotional time for Faye as she’ll be saying goodbye to the soap in a couple of days.

“She’s had such an amazing time there but made the decision in April to leave at the end of her contract.”

But Corrie fans will be able to see Faye on screen for a good six weeks yet as Kate isn’t departing Weatherfield until September.

The source said: “Her last scenes won’t air until September. Everyone will be really sad to see her go.”

Faye and her fiance Gareth Gates are said to be relocating to London, and she is expected to try out for further stage roles.

The insider added to The Sun Online: “Faye and Gareth think it’s the perfect time to put their other plans in motion so are leaving Manchester for London.

“Faye’s made no secret about wanting to be a stage star – and now could be her time.”

The star confirmed in June she had landed a role in the panto.

Posting the news on Instagram, Faye said: “Here it is… the official announcement of @brumhippodrome Panto 2019