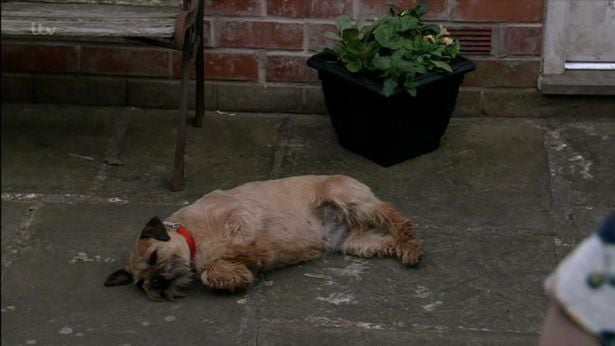 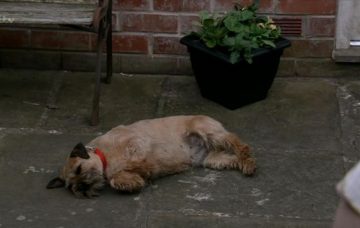 Who knew a sausage sandwich could be so deadly?

Coronation Street fans have threatened to boycott the soap after one of its cutest residents was left for dead.

Animal lovers watching the ITV serial drama were angry and upset when terrier Eccles was poisoned by a sausage sandwich.

And Corrie fans were sickened to think that Eccles might die as a result.

In scenes shown on Wednesday night (4 July), Ken’s pet was discovered on death’s door after being made part of a disgusting payback aimed at Ken’s grandson Simon.

Simon has been shunned by his group of unsavoury mates after grassing up ring leader Tyler when he broke into Daniel Osbourne and Adam Barlow’s flat and attacked Flora McArdle.

Despite being part of the gang, Simon did the right thing and stayed in the flat to make sure the pensioner was okay.

Offering to wash up the dishes in Roys Rolls for free to win favour with his neighbours, he is unsettled when Tyler arrives pretending to offer an olive branch.

He tells Simon that he’ll forgive and forget if he’s given a free sausage sandwich.

Of course, Tyler then put slug poison in the sandwich and fed it to Eccles.

Luckily, Toyah Battersby found the canine, panting and yelping in distress, in the Barlow’s backyard.

And viewers were left distressed and worrying that the soap fave might not survive the ordeal.

Why did they have to poison the dog #coronationstreet

How could anyone poison a dog #Corrie

Aaaaand the Oscar goes to….. Eccles… #Corrie Cracking bit of acting there!! pic.twitter.com/C6uitujJAA

Somebody give that dog an NTA! #Corrie

Other fans took it a bit less seriously, though, and joked that the dog should win a National Television Award!

“Somebody give that dog an NTA!” she cried.

Thankfully the vets told Ken that his terrier should be okay.

But who will nasty Tyler target next?

What did you think of the plot to kill Eccles? Leave us a comment on our Facebook page @EntertainmentDailyFix and let us know what you think!