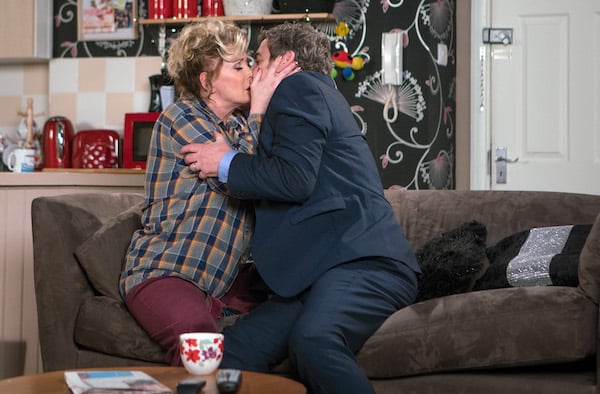 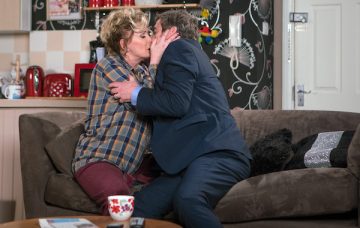 Corrie fans are NOT happy with Johnny and Liz

It’s been a tough few weeks for Johnny Connor ever since his son Aidan took his own life. But as the day of the funeral approaches he’s been finding comfort in Liz McDonald’s arms, and viewers aren’t happy.

Last night saw Johnny lashing out at wife Jenny life, right and centre. She couldn’t do right from wrong and the poor woman was walking on egg shells.

But instead of Johnny apologising and moving on, the couple seemed more estranged than ever.

However, Johnny isn’t without a shoulder to cry on. His ‘friend’ Liz McDonald has been waiting in the wings, and last night fans weren’t happy when their friendship turned in to something more.

After finding out that Aidan had left Underworld to Alya, Johnny saw red and shouted at this family for keeping something so huge from him.

But when drowning his sorrows wasn’t enough to numb the pain of losing his boy, Johnny decided to pay Liz another visit.

Despite the fact she kept telling him to go home, their comforting hug soon ended in passion as they shared a kiss… and fans are fuming!

But if last night’s visit to Weatherfield was enough to get viewers in a flap, just wait until tomorrow night’s episodes.

As Coronation Street residents prepare to say their final farewell to Aidan at his funeral, emotions are running high. And of course Johnny is not in a good place.

But when he abandons his family and goes to Liz’s flat after the service, one thing leads to another and he ends up confessing his feelings to her.

How is Jenny going to feel when she finds out she’s already been replaced?

Do you think Johnny is better suited to Jenny or Liz? Leave us a comment on our Facebook page @EntertainmentDailyFix and let us know what you think!