Former Coronation Street star Catherine Tyldesley has posted an adorable snap from a family day out on social media.

The actress, 35, took to Instagram to share a pic of herself and husband Tom Pitford with their four-year-old son, Alfie, as they strolled along a quiet beach.

The photo showed the three of them holding hands and walking towards a sunset, the waves lapping the shore to their left.

Catherine simply wrote "Everything" in the caption alongside a heart and a world emoji.

Her fans offered positive messages in the comments, with one writing: "Beautiful photo" and another commenting, "Loveley #familygoals".

Someone else responded: "Treasure it! They grow up so so so fast!" while another said, "Love this pic mate @auntiecath17".

Treasure it! They grow up so so so fast!

Last month, she posted a sweet clip of Alfie reading from The Tiger Who Came To Tea by late children's author Judith Kerr.

She told her followers she loved reading it when she was younger, writing in the caption: "It was my favourite book as a child... and it's always been Alfie's... We've enjoyed it SO many times together, although he can't read properly yet - he's more or less memorised the whole thing."

It was my favourite book as a child... and it’s always been Alfie’s... We’ve enjoyed it SO many times together, although he can’t read properly yet - he’s more or less memorised the whole thing #ripjudithkerr #thetigerwhocametotea ❤️❤️❤️

In another video on Catherine's Instagram, Alfie impresses with a convincing impression of a line from festive favourite Home Alone, pointing a toy at the camera and saying in an American voice: "Merry Christmas ya filthy animal, and a happy New Year..."

Catherine, who wowed fans recently with her own accent work in Channel 5 drama 15 Days, then tells him: "Alf, great accent babes." 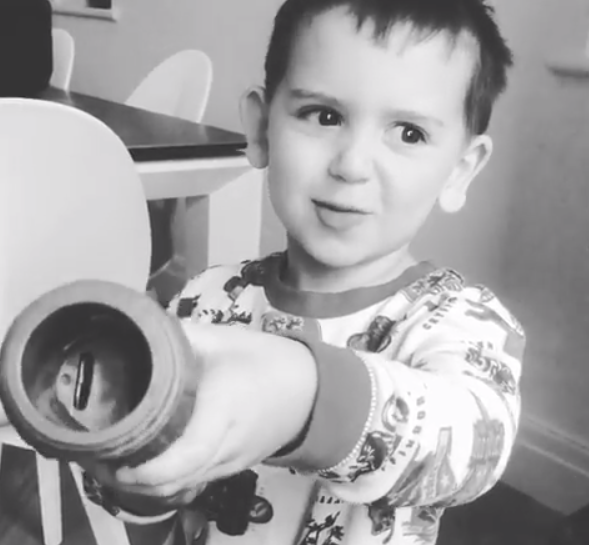 Catherine and Tom have just the one child together, but last month the actress found herself having to deny she's pregnant when her stomach appeared bloated.

She shared a shocking bathroom selfie with her top rolled up to show her distended stomach and wrote: "Seriously?! Wtf? I'm NOT pregnant... but my tummy appears to have gone completely MENTAL."

Catherine added crying emojis to her post and tagged former TOWIE star and close pal Lucy Mecklenburgh - who suffers from the same problem - in the picture, asking her: "Something in the water babes!? Literally!?"

What do you think of Catherine's latest family photo? Leave us a comment on our Facebook page @EntertainmentDailyFix and let us know.