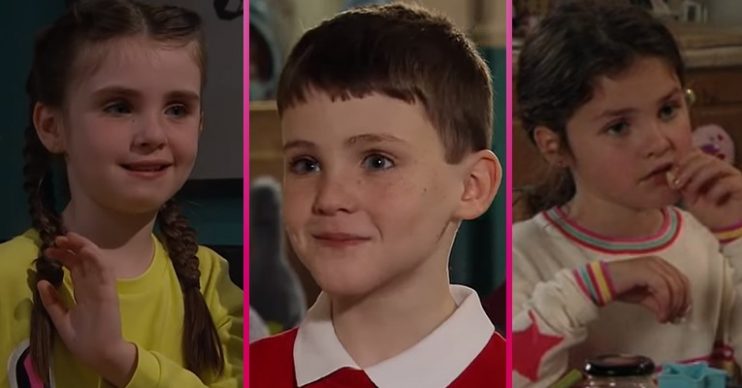 Soap star siblings Amelia, William and Isabella Flanagan, who have roles in Emmerdale and Coronation Street, have posed for a sweet picture with their grandad.

A second commented: “Too cute.”

Recently the young actors looked overjoyed as they welcomed new puppy Daisy into the family.

Earlier this month, William and Isabella, who are twins, celebrated their ninth birthday and Rachel posted an adorable throwback picture with the two as babies.

All three children have a role in an ITV soap.

Both William and Isabella joined Coronation Street in 2017 as cousins Joseph Brown and Hope Stape.

Currently Isabella’s alter ego Hope is at the centre of a main storyline, which saw her half-sister Jade come to live on the street.

Jade moved in with Hope’s mum Fiz, Hope’s stepdad Tyrone and stepsister Ruby, to be a live-in tutor for Hope, but Fiz had no idea she was really John Stape’s daughter.

After falsely accusing Fiz of abusing Hope and getting her sister to lie about how she got injuries, social services took Hope and Ruby away.

But the plan soon backfired and Hope admitted that her mum never hurt her.

Last week, Hope ran away looking for her sister, but when Jade found her she decided it would be best to take the little girl back to her parents.

Whilst Tyrone took Hope to hospital to be checked over, Jade waited at the house.

When Fiz came home, she ended up hitting Jade over the head with a chopping board.

But instead of telling the police Fiz attacked her, Jade told them she was mugged.

However she proceeded to blackmail Fiz and Tyrone saying she’ll tell the police the truth if they won’t let her see Hope.

Will they allow her access to the schoolgirl to protect Fiz?