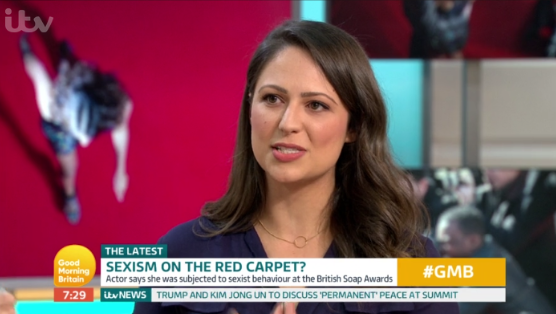 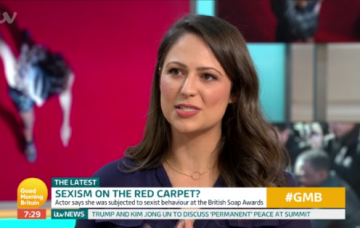 Coronation Street’s Nicola Thorp appeared on Good Morning Britain earlier today to talk about sexism on the red carpet, but she also let slip she has a boyfriend.

The actress had a heated debate about women being photographed by intrusive paparazzi while they’re getting in and out of cars at events, and held her own against host Piers Morgan as he argued against her.

But while she was talking about photographers trying to take horrific up-skirt pictures of her while at the recent British Soap Awards, Nicola also revealed her boyfriend was in the car with her.

Nicola told Good Morning Britain viewers: “What I do think should be banned, to be honest, is photographers taking photos up skirts when I get in and out of the taxi.

“A photographer pushed past my boyfriend to get a photo down my top.”

So who is her boyfriend? Her fans have been frenziedly speculating for weeks.

They have linked the actress to co-star Charlie de Melo because of the number of pictures the pair share of them together on their social media pages.

They have previously confirmed they have been friends for years, but neither have ever officially confirmed if they’re in a relationship or not.

The could-be-couple recently enjoyed a holiday to America last month, taking in the sights of Disney World.

They shared lots of fun photos together where they looked like they were having the time of their lives.

It’s no surprise Nicola has been enjoying some well-earned time off from Corrie filming.

After the drama her character has been through over the last few months at the hands of estranged dad Pat Phelan, it’s no wonder she needs a break.

Friends or more? We hope more. What great #couplegoals!

Did you see Nicola fight for her cause on Good Morning Britain? Leave us a comment on our Facebook page @EntertainmentDailyFix and let us know what you think!