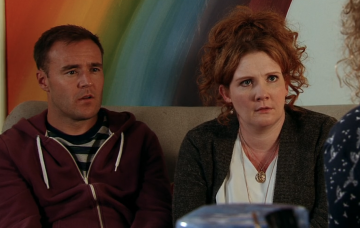 What a little terror!

Parents Fiz and Tyrone were left flabbergasted during last night’s episodes after a remorseless Hope gleefully admitted she lied about not knowing the whereabouts of nemesis nan Evelyn’s pet Cerberus.

But they were even more shocked after a child psychologist assessed their girl as showing “callous and unemotional traits” – and claimed her needs were beyond the scope of local resources.

After an out-of-area placement was recommended to deal with Hope’s antisocial actions, it seems Tyrone had already anticipated his family would need specialist help and had done his research about a suitable unit in Birmingham.

“So you want to send her away?” an staggered Fiz asked.

“No, I don’t want to,” an exasperated but concerned Tyrone replied.

“But I can’t handle another day like today. You heard what [the child psychologist] said – Hope needs help.

“And if that means sending her away, that’s what we need to do.”

It had indeed been an exhausting day for the residents of number 9.

After disruptive Hope had kicked up a stink about going to school, Tyrone had to take a day off from the garage to look after her.

But during a walk with his Evelyn’s beloved dog, he became occupied with a phone call and tied Cerberus up to the fence of the public gardens and asked Hope to keep an eye on the pooch.

While he was distracted, Hope wasted little time in getting one over Evelyn, who has scolded and punished the wayward child way beyond what she has deserved.

However, her revenge was brutal: taking Cerberus by the lead, Hope swiftly dumped him on a tram to Rochdale and pretended not to know what had happened to him.

And when it came time for Tyrone and Fiz to break it to their unwelcome house guest they’d lost her only pal in the world, Hope quickly piped up and revealed his destination.

“Now the dog is gone, the bad lady can go,” Hope reasoned, having overheard accommodating Cerberus was a bit of a sticking point when it came to getting rid of Evelyn.

“Are you going to shout at me?: she asked a furious Tyrone, causing him to immediately calm down when he realised the truth.

“No, but only because I know you’re sorry,” he said.

“I’m not sorry!” she declared, leaving her parents dumbstruck.

Viewers struggled to work out who they had less sympathy for – awful Evelyn or naughty Hope.

But Fiz and Tyrone’s reasonable approaching to parenting certainly came in for criticism.

One Twitter used observed: “Evelyn is one acidic old woman, who I want to hate, but if Tyrone and Fiz were tougher with Hope, maybe she wouldn’t be a brat.”

Another said: “Hope is a horrible little child and it’s annoying the way fiz lets her away with anything.”

“So, Hope is a psychopath?” asked a third.

Another fan declared: “Hope is a spoilt brat & Fiz & Tyrone are bad parents!”

And another believed they had pinpointed the problem as being with the little rascal’s mum: “Fiz never believing Hope can do no wrong isn’t helping.”

Among all this, young actress Isabella Flanagan’s performance was much admired.

“Hope is the best thing in Corrie right now. Loved the defiance!  She acted Mo Lipman off the set ;-),” tweeted one fan.

Do you think Fiz and Tyrone have failed as parents?