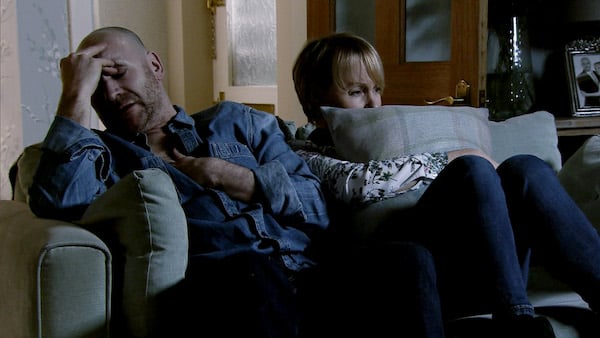 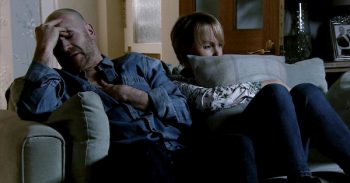 Coronation Street fans were left bewildered during Sunday night’s episode after an unobservant Sally Metcalfe didn’t notice her husband having a heart attack because she was so engrossed by the telly.

Cab boss Tim told Sal he thought he was suffering from indigestion prompted by a very large breakfast as he returned home from a 17-hour shift.

But while viewers saw him sweating heavily and clutching at his chest after he joined her on the sofa, Sally failed to spot he was writhing in pain – even though she was sitting right next to him.

Luckily for Tim, his sister-in-law Gina Seddon couldn’t shake off the feeling he was seriously unwell after seeing him looking grey-faced earlier.

Having made her moves on Tim during Sally’s recent spell in prison and escaping serious injury – unlike Sally – after Underworld’s roof collapsed, Gina had decided to call it quits and leave the cobbles of the Street behind her.

But even though Tim had given her short shrift when she tried to order a taxi from him to drive her away from Weatherfield, Gina still insisted her driver make a U-turn after fretting over Tim’s condition.

Making a dramatic return to the Street before she had even really left, Gina rushed into her sister’s family home to point out Tim was in a bad way and insisted he seek medical help.

Despite his protests his discomfort was due to eating extra sausages, a GP soon confirmed it appeared Tim had suffered a mild heart attack – and he was soon wheeled into an ambulance for further tests at the hospital.

A horrified Sally – who had been so captivated by a zombie film she didn’t realise Tim was suffering – later insisted her hubby would be following a healthier lifestyle after doctors warned Tim’s experience was a “shot across the bows”.

“He wouldn’t know a mango if it hit him on the head,” she said as he tried to convince the medics he ate plenty of fruit and veg.

However, those watching at home were still in disbelief that Sally didn’t pick up on what was going on right next to her.

“Why is Tim dying beside Sally and she’s squealing and squawking at the TV?” asked one fan on Twitter.

“How dozy is Sally? Tim’s having a heart attack right next to her and she’s oblivious. #corrie,” added another.

A fourth chuckled: “How has Sally not seen him practically dying on the chair lmao #corrie.”

And another tweeted: “Sally you might wanna check on Tim #Corrie.”

Sally: “I should’ve noticed Tim was having a heart attack but I was so busy watching Zombezi” 😂 #Corrie