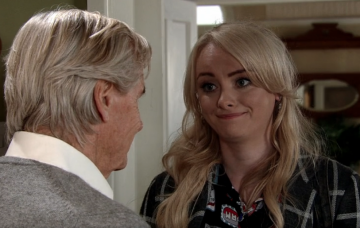 Does she have a cushion stashed in her dress?

Viewers accused scriptwriters of getting their dates jumbled up as they pointed out Sinead – recently diagnosed with cervical cancer – was showing far more than expected.

It is believed the character is yet to reach the end of her first trimester – and that stage is crucial to her and her baby’s chances of survival because of how it affects what kind of chemotherapy treatment she is able undergo.

But according to many of those watching, Sinead – played by Katie McGlynn – looks to be far further along than nine weeks, as per storyline.

Dozens of fans were left scratching their heads by the baffling sight of the factory worker cradling her protruding belly with both hands in a scene where her and hubby Daniel dropped in to see his father Ken Barlow.

I thought Sinead was only just coming up to 12 weeks pregnant? In which case why does she have a massive bump already?! #Corrie #CoronationStreet

How has Sinead got such a bump at, what, 9 weeks pregnant?? #corrie #coronationstreet

Sinead is not even 12 weeks yet?? That bumps huge #Corrie

And as she crossed across the room to speak to her unwilling confidant Ken in the kitchen, her changing figure was emphasised all the more as her loose dress and coat clung to her sides.

Several fans complained the soap’s portrayal of Sinead’s rapidly developing pregnancy was “unrealistic” and ‘got the basics wrong’.

They really should make things more realistic, Sinead wouldn’t have a bump that big yet! #Corrie

The Sinead storyline has been incredibly moving but the timing is wrong – if she’s waiting for her first trimester she wouldn’t have a bump that makes her look 4 or 5 months pregnant? And your portrayal of NHS nurses ignoring her in the corridor just wouldn’t happen. Get it right

@itvcorrie you tackle such sensitive issues yet get the basics wrong. Sinead has already had her 12 week scan & annouced she’s 3 months pregnant as well as a huge bump. Now she’s waiting for the end of her 1st trimester to start treatment? #confused

Can you explain why Sinead has such a big bump if she hasnt even got to the end of her first trimester as she stated to Ken friday? Not realistic… @itvcorrie

@itvcorrie come on Corrie..sinead is not even 3 months gone and got a pretty big bump…most people don’t even show by that stage.

And one viewer joked that Sinead would soon be “waddling” at her current rate of blooming.

@itvcorrie come on Corrie think we are stupid, Sinead is 3 months pregnant not nearly 7 she is huge, be waddling next week at this rate…..making a lot of mistakes lately 😳

Sinead’s expanding bump isn’t the first inconsistency fans have leapt on during the course of her emotional storyline.

Last week furious viewers hit out at the distraught character being left to sob by herself as she walked through the corridors of a hospital after her terrible cancer diagnosis as oblivious nurses walked on by.

“No nurse would just walk past without asking or checking if she was okay.. Disappointed for all those caring nurses that watched that episode. Bad call Corrie,” tweeted one fan.

Nonetheless, actress Katie has received rave reviews for her performances, even though Sinead is tipped to pass away this Christmas.

Speaking about the possibility Sinead could die, Katie recently insisted she wasn’t concerned about anything other than her performance.

She said: “”I was just excited. I thought, whatever the outcome is, it is what it is and I’m just happy to play the role.