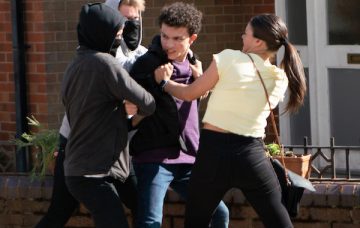 He's back in Weatherfield to testify against Tyler

Simon arrives back in Coronation Street next week from Cornwall where he’s been hiding out with grandad Ken, while waiting to be sentenced.

Along with bully, gang-leader and all-round thug Tyler, Simon was caught by the police after breaking into Adam and Daniel’s flat as they planned to rob Flora.

Their evil plan was thwarted though when the OAP returned home unexpectedly, leading Tyler to throw a jewellery box at her head, which knocked her out cold.

He did a runner but Simon’s conscience got the better of him and he stayed to make sure she was ok, landing himself in trouble with the police at the same time.

While Simon pleaded guilty to the offence and told the cops about Tyler, Tyler denied he was involved meaning Si now has to testify against his former friend in court.

And Tyler hasn’t taken that well. AT ALL.

When Si arrives back on the cobbles, he immediately starts getting threatening text messages, so knows the gang are watching him.

Later, he’s almost dragged into a passing car and is only rescued by Kate, who sees what’s going on and steps in to pull Simon to safety.

As the week goes on, the threats against Simon get worse, leading him to wonder if he’s doing the right thing by standing against Tyler.

Will he go through with the court case?

Fans even threatened to boycott the popular ITV soap when the mutt was poisoned and left for dead by cruel Tyler.

Should Simon back out of the court case for his own safety? Leave us a comment on our Facebook page @EntertainmentDailyFix and let us know what you think!