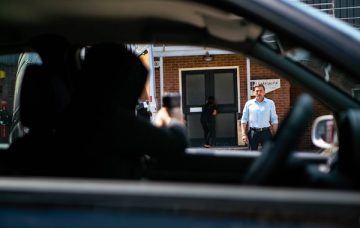 He takes a bullet as Simon is threatened by Tyler's gang

Peter promises that he’ll protect his son Simon from the gang that is terrorising him no matter what next week.

But the new Underworld boss probably didn’t think that would include taking an actual, literal bullet for his child.

Simon returns from Cornwall just in time for his sentencing and also to testify against teen horror story Tyler.

Earlier this year the pair broke into Adam and Daniel’s flat with the intention of robbing it.

Unfortunately they were caught in the act by Daniel’s OAP friend Flora and Tyler panicked, throwing a jewellery box at her which knocked her sparko.

While he fled, Simon hung around to make sure she was ok – an act which landed him in big trouble with the police.

As he returns to take to the stand against Tyler, Simon begins to receive threatening text messages from the gang.

Kate manages to thwart a kidnap attempt and, realising how serious the situation is, Peter steps in and takes Simon to the factory where he can make sure he’s safe.

But when Peter has to go out, he asks Carla to keep an eye on Simon. She loses him when she goes off in search of Daniel when pregnant Sinead reveals she’s bleeding.

As Peter and Carla both head back to the factory, they don’t see a car slow down and a gun poke out of the window.

Carla is horrified when a shot rings out and Peter is hit square in the chest.

As she fusses and worries about him, Michelle spots her concern and confronts Carla, telling her she knows she still has feelings for her ex.

Could the shooting push them together again?

Corrie fans were left delighted last week when Carla and Peter finally snogged in the factory after flirting with each other for the best part of a year.

Are Carla and Peter really star crossed lovers? Let us know what you think by leaving us a comment on our Facebook page @EntertainmentDailyFix!