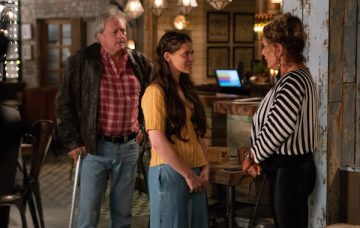 Liz McDonald gets the shock of her life next week when her ex-husband Jim reveals why he’s back in Weatherfield.

While the pair are having lunch together at the Bistro, he tells her that the woman at the next table is their ‘dead’ daughter Katie.

Long-term fans of Corrie will know that back in 1992 Liz gave birth to a premature baby girl who tragically only lived for one day.

So to say she’s stunned by Jim’s news is a bit of an understatement.

Jim goes on to explain that there was a mix-up at the hospital and their baby actually survived, was adopted and moved to Australia.

Liz can’t believe what she’s hearing, but when Jim produces the results of a DNA test which confirm what he’s saying, she’s shocked to the core.

He tells Liz that Katie is now called Hannah and Hannah attempts to introduce herself to Liz.

But it’s all too much for Liz and she tells them both to leave while she tries to take in the enormity of the news.

Later Jim calls to see her and hands her a photo of Hannah, saying she really wants to meet her.

A confused Liz turns to Eileen for support and together they go to meet Hannah in the Bistro.

Liz is beyond emotional as she tells Hannah she’s waited her whole life for this day. After a successful reunion they hug and plan to meet again.

Emotional, Liz visits Michelle and confesses that Hannah’s arrival has turned her world upside down.

She asks Michelle how she handled it all when Ali came back into her life and it was revealed that Ryan wasn’t her biological son.

Later in the week, overcome with emotion, Liz visits Katie’s grave where she breaks down.

Will she be able to build a relationship with her newly discovered daughter? Or is it too much for her to take?

What do you think of this storyline? Let us know what you think by leaving us a comment on our Facebook page @EntertainmentDailyFix!