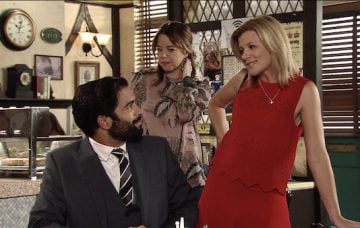 We can't decide if he's very brave or very stupid for this!

Imran Habeeb puts his wotsits on the line next week when he ends up sleeping with sister Leanne and Toyah Battersby.

Fans of the soap know that Imran and Leanne are already having a secret fling, but he’s stunned when Toyah rocks up at his office and they end up kissing passionately.

It comes after Toyah is rejected by Peter Barlow after the former couple are set up by Carla Connor.

Carla decides that if Toyah and Peter are back together, she won’t be tempted to get involved with him again.

She dupes them into meeting for lunch at the Bistro and Toyah confesses she still loves Peter and wants to try again.

But Peter doesn’t feel the same and an upset Toyah heads to the solicitors’ office in search of Leanne.

But she actually runs into Imran and pours her heart out to him.

The end up sharing a bottle of wine and – as is the way in Soap Land – one thing leads to another.

When Imran’s business partner Adam finds out that he’s bedding both ladies, he finds it hilarious, but warns Imran that it’s a recipe for disaster.

Later Leanne admits to Toyah that she’s seeing someone from work but bottles out of saying it’s Imran and lets Toyah think it’s Adam.

She then tells Imran that she wants a strictly casual relationship and seduces him in the office, with Imran only too happy to oblige!

Meanwhile Adam runs into Toyah and she tells him that Leanne has revealed all about her office romance and she has her blessing.

Adam is knocked for six by Toyah’s cool attitude and heads back to tell Imran that Toyah knows he’s hooking up with Leanne too and doesn’t have a problem with it.

Imran feels like the cat that got the cream – but we don’t expect that will last for long when the women find out what’s really going on.

What do you think Leanne and Toyah will do when they find out the truth? Let us know what you think by leaving us a comment on our Facebook page @EntertainmentDailyFix!