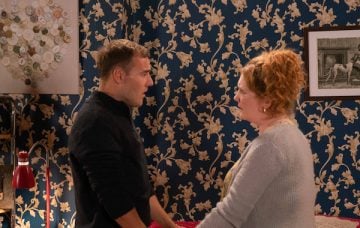 Prepare to sob your heart out...

Fiz Stape leaves Coronation Street next week – and it will be in a blur of tears. For the fan favourite character AND soap fans.

It’s no secret that battle-axe Evelyn will have a hand in Fiz’s emotional exit, but the ITV soap has now released spoilers that confirm Fiz’s daughter Hope will also be leaving with her mum.

And, in fact, Hope’s behaviour is central to the reason they leave.

Viewers have seen Hope’s behaviour go from bad to worse recently, resulting in her exclusion from Bessie Street primary school for biting a teacher.

On Monday (3 December), Hope ‘loses’ Evelyn’s beloved dog Cerberus – and by that we mean she deliberately lets the pooch go!

To Tyrone’s horror, the mischievous child reveals she put Cerberus on a tram bound for Rochdale – and spitefully refuses to apologise to Evelyn, who is understandably furious and concerned!

Fiz and Tyrone decide to visit a therapist about Hope’s bad behaviour, where Fiz is shocked to learn Tyrone has already found a special school for Hope to attend that might help with her behavioural issues.

The trouble is, it’s in Birmingham.

As the week continues, tensions increase between Fiz and Evelyn and the whole family – which come to a head when Hope bites her sister Ruby.

After some soul searching, Fiz makes the huge decision to move to Birmingham temporarily so Hope can attend the special school.

Having spent months trying to find alternative accommodation for Evelyn, Fiz allows her to stay in the house while she’s gone and she bids her partner a sad goodbye.

Jennie McAlpine has been written out of the ITV soap after going on maternity leave.

She announced she was pregnant with her second child in April, and gave birth to daughter Hilda last month.

Jennie is expected back on screen as Fiz towards the second half of 2019.

Are you glad Evelyn is staying? Leave us a comment on our Facebook page @EntertainmentDailyFix and let us know what you think!