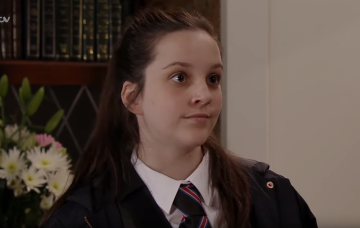 Amy Barlow’s baby daddy will be revealed as menacing gang leader Tyler Jefferies, according to a report.

He exacted his revenge with a terrifying campaign of intimidation which also saw Peter shot in the belly with a paintball gun – although it wasn’t clear the firearm was a dud at the time.

And Tyler’s disruptive mother Vicky has also been responsible for bringing grief into the Barlows’ lives after she wangled herself a job at Underworld, repeatedly escaping punishment as she sowed dissension among the knicker-making ranks.

Read more: 11 characters who have grown up on Coronation Street

However, this plot development will be the most shocking of them all to involve the young troublemaker – and will shatter the lives of Amy’s parents Steve and Tracy.

The Sun also claims 14-year-old Amy will plead with her mum to adopt the newborn when it arrives because she can’t handle being a parent herself.

Additionally, a soap insider is reported as telling the news outlet that Tyler will demand to be part of the child’s life, leading to a messy legal battle.

The source is quoted as saying: “It’s not long after giving birth that Amy decides she doesn’t want to be responsible for the baby. It’s tougher than she ever thought it could be.

“Although it’s hard she decides to put the tot up for adoption.

The hard-hitting storyline is expected to begin at the start of January.

A previous report claimed Tracy will hit the roof and say she wants to murder the baby’s dad after Steve discovers a pregnancy kit.

And although they demand she has an abortion and Amy agrees, the troubled teen apparently goes back on her decision at the last moment.

Fans – and both Steve and Tracy – initially suspected Dev’s son Aadi of being Amy’s sweetheart.

But the possibility of him being the dad was later ruled out after Amy made it clear she was not interested in him.