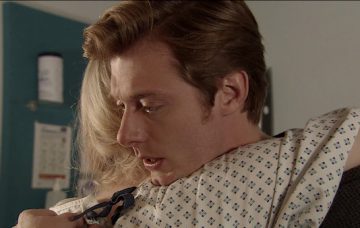 Daniel's about to have his world blown apart

It’s not a great week for Daniel in Corrie when he discovers that Sinead has been hiding a huge secret from him.

Us viewers all know now that the factory worker has been diagnosed with cervical cancer and has been advised to terminate her pregnancy and start treatment.

But poor Sinead is so devoted to her unborn child that she can’t bear the thought of losing it, so she’s not told her new husband the truth.

Daniel finds out in the worst possible way next week when pregnant Sinead collapses at work.

She’s rushed to hospital and – on seeing the ambulance – her father-in-law Ken (who knows her secret) insists on going with her.

While Sinead undergoes tests, Daniel becomes aware that there’s something seriously wrong and it’s left to Ken to break the terrible news to him that she has cervical cancer.

Daniel’s devastation quickly turns to rage as he realises Ken knew about the cancer but kept it from him.

He’s left even more horrified when Sinead confesses that she’s refused treatment as it would mean losing their baby and not being able to conceive another one.

Daniel begs her to do whatever it takes to make her chances of survival as high as possible, but Sinead is adamant that the baby’s life comes first.

Back at home, Daniel takes out his fury on Ken but Peter steps in and explains that their dad may have many faults, but he can’t be held to blame for Sinead having cancer and respecting her wishes by not saying anything.

He implores his half-brother to be the bigger man and stand by Sinead despite their differing opinions over the baby and cancer treatment.

Ken thanks Peter for stepping in and promises he will do his best to make up for his past mistakes.

Back at the hospital Daniel cuddles up to Sinead and promises he will never leave her and will always love her.

“When they say to her you’ve got a lump, she says ‘is the baby OK?’ She’s got a maternal instinct straight away, she’s not thinking about herself.”