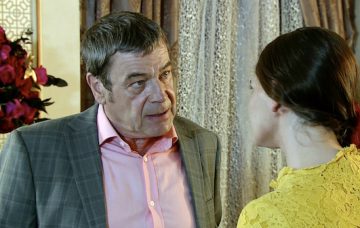 Is Hannah about to blow Johnny Connor's world apart?

Hannah Gilmore is a loose cannon next week as she approached Johnny Connor at Steve and Tracy’s wedding, threatening to expose a huge secret.

Hannah – along with her lover Jim McDonald – has been trying to blackmail the Rovers landlord by revealing to his wife Jenny that he had a fling with Jim’s ex-wife, Liz.

This week viewers will watch as Hannah steps up the blackmail and sends Jenny a bouquet of flowers with a card reading: “To help you through tomorrow.”

As Jim tells Hannah to leave Weatherfield without him, she gets impatient and sidles up to Johnny at the ceremony of her ‘brother’ Steve, demanding he hand over £5k.

Hannah tells Johnny that if he doesn’t cough up the cash, she’ll tell Jenny all about his night with Liz.

Johnny is horrified, but will he comply?

Or will Hannah drop a huge bombshell, exposing herself as a fraud in the process?

When Johnny and Jenny return to the Rovers after the wedding – which may or may not go ahead after Tracy becomes convinced that Steve has had an affair with Abi Franklin – Jenny recounts the events of the wedding.

Will Johnny come clean to her about his fling before Hannah exposes him?

Johnny and Liz spent the night together while Johnny was in the throes of grief over his son Aidan’s suicide.

Struggling to cope with his loss and finding Jenny smothering, he turned to alcohol – and Liz – for comfort.

He even wanted to run away with Liz after kidnapping his baby granddaughter Suzi from the Rovers.

They confessed their love to each other but Johnny felt hurt by Liz when she called the police and told them where Johnny was with the missing infant.

Unknown to Johnny, Liz and Hannah – Jenny already knows about her husband’s night of passion with their barmaid.

But forgiving Jenny decided to keep it to herself and give Johnny another chance, putting his indiscretion down to him being heartbroken over Aidan.

Will Hannah reveal herself? Visit our Facebook page @EntertainmentDailyFix and let us know your experience.