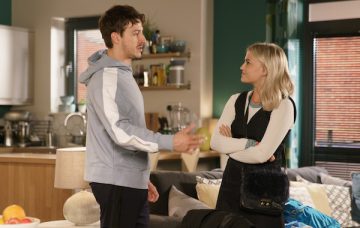 Corrie SPOILER: A new romance for Ryan and Bethany

After their extremely short-lived attempt at a relationship earlier in the year ended in disaster, it looks like the pair could be second time lucky thanks to some motherly interference from Michelle Connor.

Seeing that the couple are made for each other, Michelle decides to play cupid and sets up a date for them both to celebrate the fact Ryan’s home from hospital.

But instead of freaking Bethany out by coming on too strong like he did last time, Ryan takes the slow and steady approach instead and starts to open up about his recent car accident.

Admitting to Bethany that the day gangster Ronan tried to run him over is still playing heavily on his mind, it looks like the pair are finally starting to bond as they talk.

Ryan confesses he’s been having horrific nightmares about the day Ronan died, and is struggling to cope in the aftermath of what happened.

Corrie fans will know that Ryan was left fighting for his life in a coma after a terrifying car chase ended in him being mown down by a vengeful Ronan.

As someone who is used to dealing with dark thoughts after her ordeal last year at the hands of evil Nathan Curtis, Bethany turns out to be a great support and reassures Ryan that his nightmares are perfectly normal.

And it seems opening up about his secrets has made Bethany soften towards Ryan and the pair are soon sharing a kiss.

Could this be the start of a new romance for the Weatherfield pair?