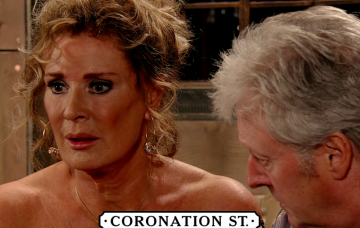 Liz is left stunned by the shocking news

Coronation Street has released a first look at the moment newly returned Jim McDonald tells ex-wife Liz that their daughter Katie didn’t die in hospital as they were led to believe.

Jim returned last week and will break the shocking news to Liz on Monday that there was a horrible mix up at the hospital and their real daughter was raised by the wrong set of parents.

He tells a stunned Liz that Hannah was raised in Australia and tracked him down after being diagnosed with myotonic dystrophy, the genetic condition Jim has.

He explains that the condition proved Hannah’s parents weren’t her biological ones.

He goes on to say that there was another baby born the same day at the same hospital and that was the baby they buried believing it to be their daughter, Katie.

He then tells Liz that Hannah sought him out through army and prison records before producing a DNA test proving that Hannah is his child.

“Katie died in hospital. We were there!” a confused Liz rants during the clip.

“I know it sounds crazy, it sounds impossible, but the hospital made a terrible mistake,” Jim tells her.

“But how? How can a hospital mix up one baby with another? Especially when one baby died?” Liz demands.

“I’ve got a lawyer preparing a campaign demanding a full enquiry as to what went on in that hospital. We will get to the truth.”

After asking her ex how long he’s known about Katie/Hannah Jim tells her that as soon as he got out of prison he demanded a DNA test.

Handing Liz the DNA results he says: “Here’s the proof. That wee girl’s our daughter.”

It was announced earlier this year that Jim – played by Charles Lawson – would be returning with a young woman he says is their daughter.

The Sun revealed that Jim would rock up on the cobbles following his release from prison, with a glamorous younger woman.

A source told the paper: “They’ve cleverly cast the role of Jim and Liz’s daughter to a beautiful woman in the hope of making her the street’s new resident fox.

But spoilers for next week suggest that all is not quite as it seems with Hannah when Steve and Tracy do some digging into Steve’s new found sister.

Could Hannah possibly be scamming the McDonalds? And why?

Is Hannah really Liz’s daughter? Leave us a comment on our Facebook page @EntertainmentDailyFix and let us know what you think!

Coronation Street continues on Monday at 7.30pm on ITV