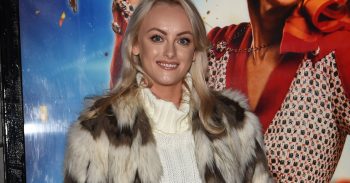 She is "fully committed" to playing out Sinead's cancer storyline

In January, Katie admitted her Coronation Street future was “up in the air”.

She said at the time: “I’m contracted well into this year but it is up in the air. Although I have to wait and see what happens, I quite like not knowing.

The reports come just hours after Faye Brookes confirmed she will be leaving her Corrie role of Kate Connor following “four fabulous years” in Weatherfield.

She tweeted: “Thanks to everyone for your amazing support, but after 4 fabulous years in Weatherfield it’s time for me to explore new opportunities, I’ve loved playing Kate Connor, but she needs a break for a little while and so with a song in my heart I’m off to pastures new. (sic)”

Earlier this year, Kym Marsh, who plays Michelle Connor, announced she was leaving the soap after 13 years, and just last week Tristan Gemmill, aka Robert Preston, revealed he was heading off for pastures new.

Will you miss Sinead? Leave us a comment on our Facebook page @EntertainmentDailyFix and let us know what you think.