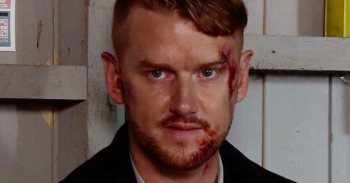 Corrie’s Gary Windass ‘to kill again, this time with intent’

He is set to become an "all-out bad boy"

The builder – played by Mikey North – was recently revealed as the person behind the Underworld factory roof collapse, which killed Rana Habeeb (Bhavna Limbachia), and he is now set to target gangster Rick Neelan (Greg Wood).

A source told The Sun: “Gary’s involvement in the Underworld roof collapse was only just the start of his demise.

“He becomes an all-out bad boy after the breakdown of his relationship with Sarah Platt.

“It’s going to cause shockwaves in Weatherfield and have huge implications for Gary.”

Mikey, 32, recently hinted at Gary’s plunge into darkness, saying: “If he thought things were bad after the factory collapse then life is about to get a whole lot worse for Gary.”

And he also teased that there is “a lot happening” for his Coronation Street character this year.

He said: “It’s going to be a big year, there’s a hell of a lot happening for Gary.

“It’s kind of his big turning point; there is lots to come that will take us to all locations far and wide. It should be good. It’s kind of the next strand of the characters life really.

Meanwhile, Mikey recently revealed Coronation Street viewers have been hurtling abuse at him in the street for portraying “bully” Gary.

The actor admitted it will take “some time” for him get used to the insults he has been receiving following his character’s bust-ups with Seb Franklin (Harry Visinoni), which comes after he was targeted in 2008 when he first joined the show.

Mikey said: “Since the recent episodes, where Gary’s kind of bullying Seb, it’s gone back to how it was when I started on the show and Gary is hated again – people are shouting at me on the streets!