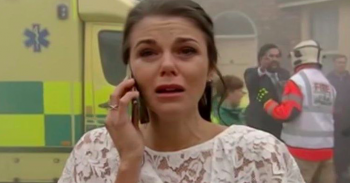 Rana died in the tragedy...

Coronation Street fans have been dealt a double blow this week, after the ITV soap aired its devastating factory collapse.

Last night, they saw bride-to-be Rana die after being trapped under rubble in scenes which were described as “the saddest ever”.

And now even more bad news, as viewers will have to wait another FOUR days before being able to see the fallout from the tragedy.

In a frustrating scheduling change, Friday’s double episode has been cancelled to make way for football .

Instead of being able to catch up with events in Weatherfield after a traumatic week, those tuning in to ITV1 will instead find the Live Euro 2020 qualifier between England and Czech Republic.

Read more: Coronation Street SPOILER: Roy gets a blast from the past

The football takes up pretty much the whole of Friday night’s ITV1 schedule, with coverage starting at 7pm and going on until 10pm.

After 45 minutes of news, there’s then an hour of Euro 2020 Qualifier Highlights, before a repeat of Harry’s Heroes: The Full English.

Not a very tasty schedule if you don’t like football.

Soap fans will have to wait until Sunday, when ITV1 will air an hour-long episode as Rana’s family and loved ones grieve over her premature death.

However, it will be a long time before fans discover who was responsible for the damaged roof collapse.

Wednesday night’s double episode (20 March) saw Rana lose her life when she returned to the factory to collect her bag – leaving her bride Kate waiting at the register office.

While she was in her workplace, disaster struck and the roof caved in.

In heartbreaking scenes, Kate eventually sneaked in to see Rana and the pair tearfully exchanged their vows before Rana slipped away.

One fan said: “That was the saddest episode I’ve ever watched. Hats off to @Faye_Brookes @BhavnaLimbachia on their outstanding performances on tonight’s @itvcorrie #Corrie #Kana #Rana #Kate.”

Another said: “Rana just died and I’m a mess.”

Do you get frustrated when the schedules are changed for sport? Leave us a comment on our Facebook page @EntertainmentDailyFix and let us know what you think!