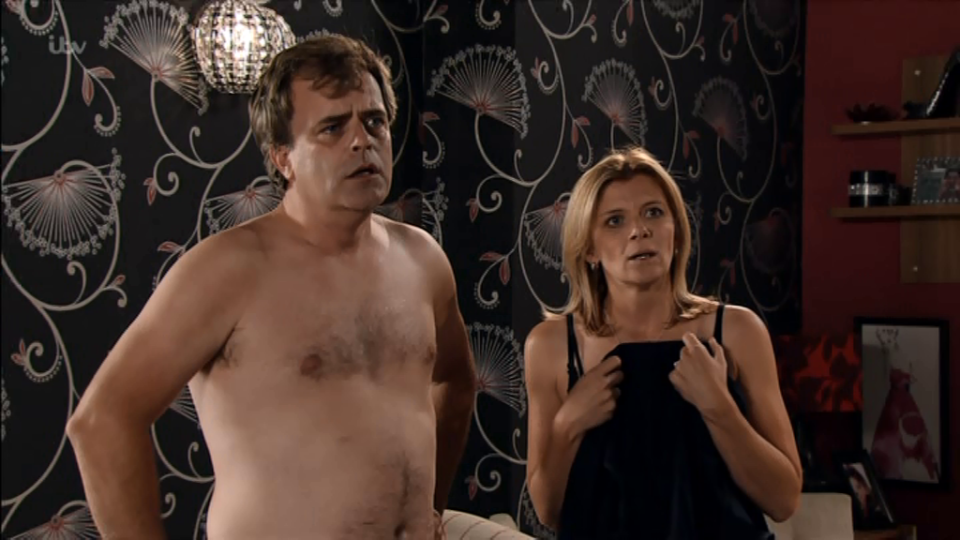 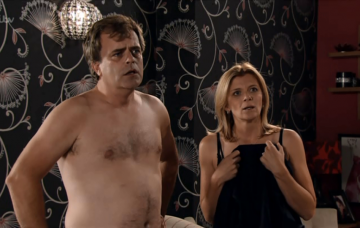 Corrie fans cover their eyes as Steve cheats on Tracy – with Leanne!

Steve McDonald had better watch his back… Because when Tracy Barlow finds out he’s cheated on her, she’s going to go nuclear!

Corrie viewers were in total shock last night (Wednesday 26 September), when unlikely Lothario Steve had a one night stand with ex Leanne Battersby.

While it’s no secret that Steve doesn’t really want to marry Tracy again (and who can blame him?), fans had predicted he’d stray with Abi and NOT Leanne.

After all, Abi and Steve shared a kiss recently and some viewers believe they’re a good match.

But it’s not the first time Leanne and Steve have ended up in bed together, and we’re sure it won’t be the last!

After getting drunk and reminiscing about old times, Steve and Leanne ended up in bed together and were caught in the act by Tracy’s own brother Peter!

Peter and Tim Metcalfe walked in on Steve and Leanne in a state of undress and delivered the news that Tracy was in hospital after Amy had fallen.

Obviously realising it didn’t look good, Steve spluttered: “It’s not what it looks like…. The thermostat’s broken.”

The owner of the local taxi rank is just days away from marrying Tracy… But had mistakenly believed that Tracy had given him a free pass to cheat before the wedding.

But what she’d actually done was given him a free pass to the spa where they were supposed to be holding their wedding.

What a catalogue of errors.

Fans were left in disbelief that Steve had cheated once again – and with old flame Leanne.

Uh ohhhh Steve and Leanne have been doing bits….🤣🤣🤣 #Corrie

If Tracy finds out about his boxers and Leanne I think they will need to find a hospital bed for Steve! #Corrie

Steve and Leanne. Ugh. I actually really liked Leanne with Imran but of course #corrie had to go and mess that up.

Just caught up with #Corrie really, Leanne and Steve again, while his in relationship Again… How many bad mistakes is the both of them making.. Jeez.

Is there really any reason for Steve and Leanne to be at it again? As if Leanne would even go there again and there not a convincing couple #Corrie

One said: “If Tracy finds out about his boxers and Leanne I think they will need to find a hospital bed for Steve!”

Another said: “Leanne and Steve??? Yeah…this is not gonna end well…or will it have a happy ending?”

A third simply asked: “What are Leanne and Steve playing at?”

Others predicted that the one night stand will produce baby number two for the former lovers, who already have a child together.

Will Tracy’s brother reveal the truth before the wedding? And are Steve and Leanne destined to be together?

Who do you think Steve should end top with? Leave us a comment on our Facebook page @EntertainmentDailyFix and let us know what you think!