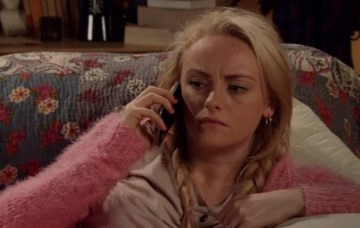 Fans watched with their hearts in their mouths as pregnant Sinead Osbourne endured her first round of ‘mild’ chemo as she is battles cervical cancer.

Read more: Corrie legend Norris Cole could return to the cobbles ‘next year’

However, in sad scenes shown on Wednesday (31 October), she later decided to refuse further treatment for fear of harming her unborn baby.

But, perhaps most heartbreakingly of all, she is keeping all of her emotions bottled up and not telling her husband Daniel about the possibly life-or-death decision.

After her first round of chemotherapy, Sinead was left feeling ill and weak and still in two minds about having treatment.

Since being diagnosed with cancer, she’s been determined to put the life of her baby before her own.

Once home, Sinead searched the internet for effects of chemotherapy on pregnant women.

And, when she later received a call from the hospital attempting to book her second appointment, Sinead cancelled it – shocked that the treatment is so aggressive and frequent.

But she lies to her new husband when he presses her, refusing to admit she’s dodged the vital chemo appointment she needs to stay alive.

Corrie fans were gutted that Sinead was refusing treatment, with one simply saying: “Sinead don’t stop your treatment.”

Sinead
WHAT. ARE. YOU. DOING???#corrie

NO Sinead, why would she purposly cancel her next Chemo session? She's only gona get a helluva lot sicker the longer she leaves it #Corrie

Sinead should take this seriously #corrie

Sinead's storyline has me in bits! 😪😪😪#Corrie #CorrieCanada@itvcorrie

Another lamented: “NO Sinead, why would she purposly cancel her next Chemo session? She’s only gona get a helluva lot sicker the longer she leaves it [sic].”

One more joined in, writing: “Sinead is breaking my heart this week, I really hope she and the baby make it.”

Others called it an “important storyline” and praised the ITV soap for its portrayal of mental and physical health.

"We're going to beat this, whatever it takes".

Daniel will always be there for Sinead throughout her treatment ❤️

If you've been affected by the issues raised in this story, please go to https://t.co/XAghCEzABt#Corrie #Daniel #Sinead pic.twitter.com/JEAGpS2A65