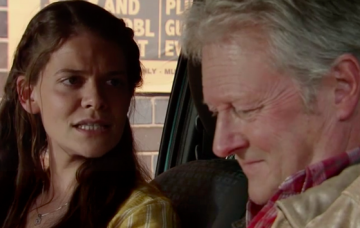 Coronation Street fans were left “disgusted” and “sickened” by a huge twist in the McDonald baby swap storyline last night.

During Wednesday night’s episode (12 September), Jim McDonald and ‘daughter’ Katie/Hannah were revealed to be vile fraudsters out for revenge on poor, unsuspecting Liz.

Viewers called it “gross” as Jim and Hannah – not Jim and Liz’s long-lost daughter, after all – snogged each other, proving that they are lovers and not family. Ewwww.

The storyline has caused controversy from the start, as fans disagreed with Liz and Jim’s daughter being ‘resurrected’.

But now, everything becomes clear, as it’s all a scam to get payback on Liz. So harsh, though!

Jim returned to Weatherfield this week with big news for his ex-wife – the baby they thought had died more than two decades ago is actually alive and well after a hospital mix-up.

He even had (forged) DNA results to prove it.

As Liz prepared to meet her ‘daughter’, suspicious viewers smelt a rat – and with good reason.

The first part of the double bill saw an emotional Liz take Eileen along for support as she met Jim and Hannah for lunch. In heartbreaking scenes, Liz told Hannah she’d waited all her life for that moment.

After the pair hugged and made an agreement to meet again, Hannah revealed her true colours to viewers.

Sitting in a car with Jim, she told him it was “harder than I thought it would be”, to which Jim replied: “You made your old dad proud, so you did.”

In a scene which sent shivers down many viewers, she replied: “Less of the old. Certainly less of the dad. You’re neither.”

And the pair kissed passionately on the lips!

The second episode exposed their wicked scheme to seek revenge on Liz for, as Jim sees it, abandoning him while he languished in jail for armed robbery.

They want to empty Liz’s bank account and steal Steve’s businesses out from under him, “teaching Elizabeth a lesson she’ll never forget”.

But the plot twist seemed to be a step too far for some viewers, with one calling it the “final straw”.

One said: “I distinctly remember, though I was really young at the time, how distraught Liz and Jim where when Katie died. This storyline is an insult to every mother and father who has ever lost a child in that manner.”

I distinctly remember, though I was really young at the time, how distraught Liz and Jim where when Katie died. This storyline is an insult to every mother and father who has ever lost a child in that manner #Corrie @itvcorrie

So Jim is in on the scam? Shameful, disrespectful and I'd imagine the final straw for many viewers. #corrie

This Katie storyline is wrong if Liz had any sense she would say I’ll get a DNA test done myself. But that’s soapland for you #Corrie

It seemed quite obvious that she wasn't really Katie but I didn't see THAT coming. Jim, why so cruel? #Corrie

Would Jim really be this cruel to Liz and Steve? #corrie

Another said: “So Jim is in on the scam? Shameful, disrespectful and I’d imagine the final straw for many viewers.”

A third added: “When i knew Jim was back i was elated… slightly unsure about how i felt revisiting the katie storyline because it was heartbreaking enough BUT to then turn that storyline into an evil plan i think is more ridiculous, unbelievable and quite frankly appalling.”

There were some fans who enjoyed the storyline, though, with one calling Jim a great “villain” and another said: “It’s not sick. It’s called sweet revenge for Liz & Steve for abandoning Jim in prison.”

Upcoming episodes will see Steve and Tracy suspect a scam and, with Tracy on the case, we don’t think it will be long before Hannah’s been strung up to dry!

What do you think of the storyline? Sick or a great plot twist? Leave us a comment on our Facebook page @EntertainmentDailyFix and let us know what you think!