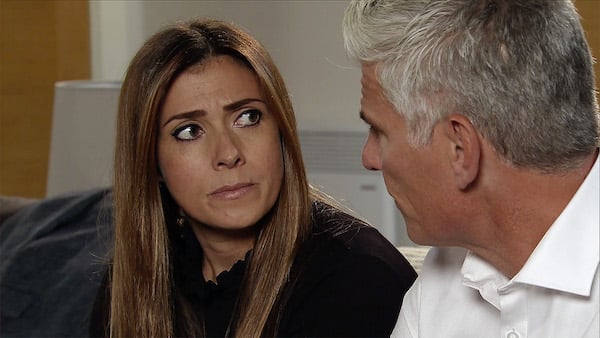 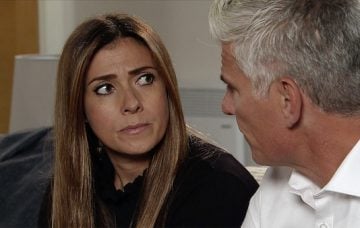 The engaged couple just broke up

After the emotional events of last night (Wednesday March, 13), when she broke up with Robert, viewers accused the soap of “destroying” Michelle and making her “boring”, “annoying” and “pathetic”.

Some critics can’t wait to see the back of her, and are even hoping it is Michelle who DIES in next week’s dramatic factory roof collapse.

During the two-parter on Wednesday night, Michelle made the heartbreaking decision to split with Bistro boss Robert because he wants them to have a child together, but she doesn’t.

After discovering she wasn’t pregnant, she told her shocked fiancé: “I do love you but I need to let you go. This is the end of the road.”

Despite his attempts to change her mind, Michelle handed back her engagement ring, packed her bags and moved out of their flat.

While she genuinely believes she’s doing the best thing for Robert’s future, he’s already showing his nasty side by trying to find someone to blame – and his first target is Carla.

Fans were quick to voice their opinion about Michelle’s character as the episode drew to an end, with one blasting: “Oh Michelle just [bleep] go. I’m bored of her now #Corrie.”

Another said: “Michelle needs to go!!!! Like what the hell man her character has expired!! #corrie #robert #michelle #teamrobert Michelle just takes from everyone.”

A third said: “I wish Corrie would keep the characters true to who they are, as she didn’t strike me as someone that would do that.”

I feel so sorry for Robert, I think Michelle is so mean #corrie @itvcorrie

I'm so beyond tired of Michelle's miserable face tbh. #corrie

“God they have destroyed Michelle’s character #corrie,” added another.

With Robert’s previous form being a tad on the unhinged side, many fans now predict he will be the one to cause the factory roof collapse.

While another thinks he’ll get together with Tyler’s mum… Hang on, though, give him a chance to get over his split from Michelle first!

Last month, Kym Marsh announced her decision to leave Corrie after 13 years, revealing it’s the “right time” for her to move on to something new.