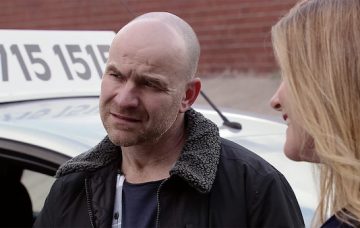 Soap star Joe Duttine reckons it could be all over for his Corrie character Tim Metcalfe and on-screen wife Sally after the cab driver ends up in bed with her sister.

Confused Gina wrecked Sally’s trial after going against her family and taking in fraudster Duncan Radfield’s lies about her sister embezzling council money and an affair between the two of them.

And not only has Gina threatened Sally’s freedom, she’s been looking to swipe her man away too – growing ever closer to her secret sweetheart Tim as they deal with the fallout from innocent Sal’s prison sentence.

In a tease of what might be in store for the struggling Weatherfield couple, actor Joe has revealed Tim will spill his guts to Sally after waking up with Gina on Christmas Eve after a heavy session the night before.

Read more: Battle of the Soaps: Coronation Street vs Emmerdale

It is believed Sally will receive the unexpected news on Christmas Day itself. Surely he could have got her something nicer instead?

Joe, 48, told The Mirror he does not expect Sally to forgive Tim for his festive indiscretion with her sibling.

“I think it’s pretty unforgivable, isn’t it?” he said.

The former Shameless and The Village star also admitted he had hoped to protect his character’s relationship, hinting he’s not all that keen on the unfolding storyline.

He said of his character’s marriage: “I wanted to protect it. As actors you put a lot of time into your character and your relationship and eventually over time you sort of nick them off the writers.

“So when new writers come along and suggest stuff you’re like ‘No you can’t do that’. So you do feel quite protective over them because you do get positive feedback and with Tim and Sally they’re a likeable couple and it would be a shame to go down that route.”

Joe also added the storyline would continue into 2019 – but hoped for some lighter plots for Tim beyond that, adding soap characters need ‘light and shade’ to develop.

“The show’s so story driven these days that character stuff slightly gets put to one side, I think,” he said, reflecting on Tim’s comedic escapades as a home brewer.