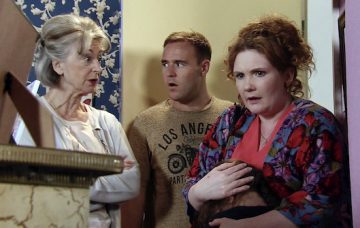 Tyrone Dobbs, Fiz Brown and Evelyn Plummer are set to be embroiled in a ‘mystery’ court room drama in an upcoming Coronation Street storyline.

Cast and crew have been busy working on location for an upcoming storyline, which involves popular characters Tyrone and Fiz heading to court.

Photos on Digital Spy show the cast wrapped up warm in thick colourful coats as they film in and out of the court building.

But who’s in trouble?

Viewers know that Evelyn is no stranger to the police, after she was arrested in France during a period away from Weatherfield.

Luckily her long lost grandson Tyrone was around to bail her out, bringing her back to the Street for some more savage putdowns and witticisms.

Evelyn seems to be the only one who is wise to newcomer Jade’s suspicious behaviour.

Could Jade be the reason the family are in court?

Viewers have spotted several clues that Jade isn’t all she seems and future episodes reveal more strange behaviour from her.

The family recently welcomed Jade into the household to care for Fiz’s daughter Hope and Tyrone’s daughter Ruby.

But fans think she is a relative of Fiz’s late husband John Stape, who turned into a serial killer before his own death in 2011.

Ever since she was introduced as Hope Stape’s tutor, fans have been suspicious that something wasn’t right.

Some believe she’s John Stape’s sister. John was Hope’s biological dad before he turned killer and then passed away himself in a car accident.

Another theory is Jade could be John’s eldest daughter, but some viewers believe she’s actually connected to Tyrone and is the sister of his abusive ex, Kirsty Soames.

There’s also the thinking that Jade just wants to take Fiz’s life over and have a ready made family.

Do you trust Jade? Let us know on our Facebook page @EntertaimentDailyFix.