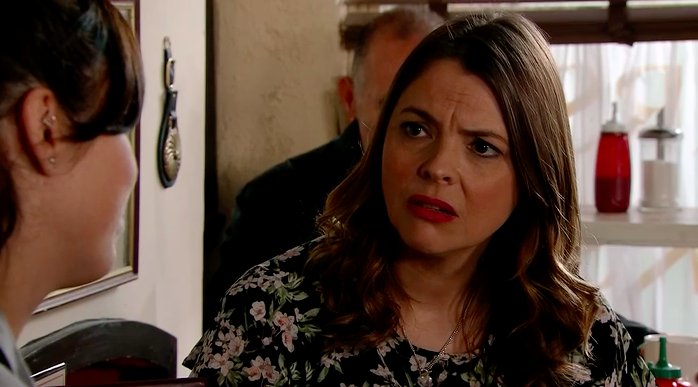 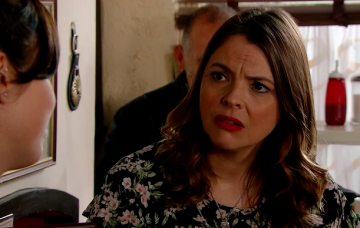 It takes a lot to get to Tracy Barlow in Coronation Street but just casually informing her that she’s killed another person will just about do it.

The florist will return to the cobbles this week after trapping her cheating husband Steve McDonald in Morocco without his passport.

Viewers watched as Tracy discovered he had cheated on her with Leanne Battersby shortly after the wedding ceremony had taken place.

She decked him during their formal dance, attacked Leanne with cake and then got horrifically drunk.

But before all of that she had thought Steve had cheated on her with Abi Franklin and taken slight revenge.

Now in years gone by Tracy’s definition of revenge was smacking somebody over the head with an bargain basement ornament or other blunt object.

But after her spell in prison for murdering boyfriend Charlie Stubbs, she’s changed and tries her best to rein in her murderous instincts.

So she decided to simply damage a car mechanic Abi was working on in the hopes of getting her fired.

Unfortunately it was Michelle Connor’s car, and Michelle used it to try and flee from drug dealer Ronan, and when she did it failed and all hell broke loose.

Ryan Connor was run over by Ronan, who them prepared to shoot Michelle but grew distracted by sirens and fled, only to hit Leanne Battersby and reverse over her.

His car them careered off the road, leaving Ali Neeson to murder him in cold blood by ripping a large pole out of his stomach.

And so when Tracy returns to the cobbles full of the joys of petty revenge, she warns that Leanne should watch her back.

That’s when she’s told about the incident and she becomes utterly terrified that she has killed yet again and could go back to prison.

She’s been responsible for Charlie’s death, but also Kal Nazir and Maddie Heath’s deaths in the fire she accidentally caused when abandoning her attempt to murder Carla Connor.

But can Tracy get away with yet another killing? Let us know what you think by leaving us a comment on our Facebook page @EntertainmentDailyFix!