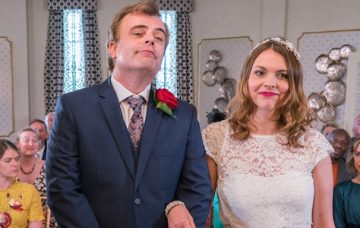 Coronation Street’s Tracy and Steve: The history of their relationship

From teens with a crush to married with a kid - what's happened to the McDonalds over the years?

It’s been a tempestuous union to say the least – married twice, with a daughter, and many, many, many fallings out in between, but Tracy Barlow and Steve McDonald might just be one of Coronation Street’s most solid couples… for now.

Tracy (Kate Ford) and Steve (Simon Gregson) were just teens when they met in 1990 (Tracy had a different head, in fact, as she was then played by Dawn Acton).

While she had a huge crush on him, he used to call her ‘squirt’ – not quite the romantic nickname Trace was probably hoping for.

But she continued to hang around with Steve and his twin brother Andy (Nicholas Cochrane) and when her parents Ken and Deirdre Barlow (William Roache and Anne Kirkbride) got divorced she rebelled by going to the amusement arcade with the twins instead of heading off to school.

Steve still didn’t see Tracy romantically, though, and went off and married Vicky McDonald (admittedly for her money), but their marriage lasted less than a year before he was accused of handling stolen goods, tried to pin the blame on Vicky, and she ended up testifying against him in court.

Tracy, meanwhile, met Robert Preston in 1996, they married and moved to London. She returned in 1999 having been accused of having an affair, but Robert followed her and they reconciled before moving away again.

Tracy returned in 2002, claiming Robert had cheated on her, but it soon became clear it was actually her sleeping with his best mate and the man-eating Tracy we know and love well and truly cemented her place on the Street.

After a brief fling with Dev, Tracy made a nasty bet with Bev Unwin that she could sleep with Roy Cropper (David Neilson).

She spiked his drink and when they woke up in bed the next morning, claimed they slept together.

At this time, Steve was married to Karen McDonald (Suranne Jones), having married for a bet previously (there’s a theme between these two here, isn’t there?!) they fell in love for real.

But she had an affair with Joe Carter (Jonathan Wrather) and ended up leaving Steve for a period, during which he let Tracy seduce him and they had a drunken one-night stand.

Tracy then found out she was pregnant, and told everyone Roy was the father, agreeing to sell her baby to Roy and Hayley for £15,000. They agreed as long as Tracy married Roy so he had legal parental rights.

All was not as it seemed, however, because Tracy soon confessed to her stepbrother, Peter Barlow (Chris Gascoyne) that Steve was the father, she’d never even slept with Roy, and the lie had just run away with her.

It was on Christmas Day 2003 that Tracy told Steve she was carrying his baby, but he responded that if she ever told Karen the truth he would kill her. It didn’t do much to curb her feelings for him though as she continued to pine after him, while keeping up the charade the baby was Roy’s.

Tracy gave birth in February 2004 and handed the baby over to Roy and Hayley, who called her Patience.

But it didn’t last long when only days later Tracy, encouraged by grandmother Blanche Hunt (Maggie Jones), decided she wanted her baby back.

She revealed the truth during Karen and Steve’s attempt at a fancy wedding and a devastated Roy and Hayley were forced to hand the baby back. Tracy named her Amy, but she still didn’t land Steve quite yet.

But the spectre of Tracy loomed large and she caused too many arguments between the couple. When Karen lost a baby of her own, it sent her over the edge.

Tracy’s sympathy was too much and Karen snapped. She stole Tracy’s car with Amy in the back and burnt the vehicle at the Red Rec, with Tracy and Steve thinking she’d killed Amy.

Amy was found safe and well with the Croppers, but for Steve it was the final straw and he told Karen to pack her bags and leave.

Tracy and Steve then dated briefly, but it turned out he was just doing it to get parental responsibility of Amy. Tracy found out the truth, and tried to stop him seeing their baby, but he won access legally.

Tracy then ended up in a relationship with violent cheater Charlie Stubbs, who had an affair with Maria Connor (Samia Longchambon) and a one-night stand with Shelley Unwin (Sally Lindsay) – so Tracy murdered him. As you do.

But he wasn’t Tracy-free for long when she was released in 2010 after her case was quashed due to unreliability of forensic evidence.

Steve was married to Becky at the time, but like Karen before her, Becky couldn’t cope with Tracy’s meddling and after her desire to have a child of her own was crushed, her marriage to Steve fell apart.

Finally Tracy had got her man and as she and Steve embarked on a relationship she fell pregnant with twins.

Tragedy struck when Tracy miscarried, but convinced Steve and Becky were having an affair, she went to confront Becky and during their fight Trace fell down the stairs. She then spitefully lied to everyone that Becky had pushed her and killed her babies.

Steve proposed to Tracy on Christmas Day 2011 and they married in 2012.

But wedded bliss didn’t last past the reception when Becky arrived with a copy of Tracy’s medical records confirming she’d miscarried before she fell down the stairs.

A disgusted Steve broke up with Tracy there and then.

They went to war over the house. Steve even moved Beth and Craig Tinker (Lisa George and Colson Smith) in to drive Tracy out, but she ended up becoming friends with them instead!

Steve was developing feelings for Michelle again, and Tracy’s claims to be ill fell on deaf ears, as he thought she was telling another lie to get him to stay. But then she collapsed with kidney failure.

At the hospital Tracy told Steve she she loved him and asked him to stay with her, which he did. But then he kissed Michelle and she insisted he had to be honest with Tracy.

So he told Tracy he wanted to be single. Not quite honest, then…

Michelle and Steve got together, married and she fell pregnant, but tragically baby Ruairi was born at just 23 weeks and passed away.

What Michelle didn’t know was Steve also got Leanne Battersby (Jane Danson) pregnant, and Michelle broke up with him when she found out. Steve tried it with Leanne, but they didn’t work.

Meanwhile, Tracy had a relationship with Rob Donovan (Marc Baylis), got back with Robert Preston (now played by Tristan Gemmill), had an affair with Liz McDonald’s (Beverly Callard) boyfriend, Tony Stewart (Terence Maynard), and had a fling with Luke Britton (Dean Fagan).

Steve and Tracy eventually found their way back to each other, getting back together at Christmas 2017.

Steve proposed in 2018 and they planned their second wedding for October that year.

But a miscommunication saw Steve think he had a free pass to sleep with someone else before the wedding – and hooked up with Leanne again.

Tracy found out, but mistakenly thought it was Abi Franklin (Sally Carman), so sabotaged a car Abi was fixing. When she discovered it wasn’t Abi, Trace walked down the aisle to marry Steve, but as she passed Leanne she seethed: “I’m coming for you bitch.”

The bride was actually cross Leanne wouldn’t let Oliver wear a kilt to the wedding, but Leanne assumed Tracy knew about her and Steve and blurted it out, causing a fight.

However, after getting drunk they went on honeymoon together. Tracy returned over a week later and told everyone she left Steve in the desert of Morocco and took his passport with her.

Steve returned and incredibly stood by Tracy when the truth about her sabotaging the car and letting Abi take the blame came out.

One person who wasn’t keen on her parents giving things yet another go was Amy, who was fed up with their constant bickering and too-ing and fro-ing. So she had her cousin Adam Barlow (Sam Robertson) draw up a parental contract making them be a better mum and dad.

In fact, the contract seemed to have such an effect Steve and Tracy decided to try for a baby.

They were stunned however when Amy revealed she herself was pregnant at just 14-years-old.

The parents pulled together and decided to adopt her baby themselves, buying a new house for them all to live in.

But Amy has had a secret abortion – how will Steve and Tracy’s relationship cope when they find out the truth?

Are Steve and Tracy made for each other? Leave us a comment on our Facebook page @EntertainmentDailyFix and let us know what you think!