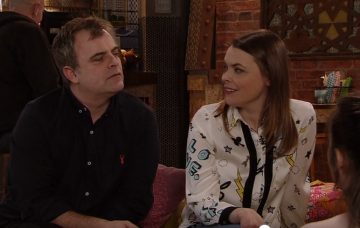 And he wants gnashers like Rylan Clark-Neal for Steve McDonald

Simon Gregson wants Coronation Street‘s Steve McDonald and Tracy Barlow to win the Lotto so she can get a boob job.

The 45-year-old actor and the 42-year-old actress have put a lot of thought into how their characters could progress on the cobbles, and they would love to see their alter-egos come into some serious money.

Speaking to Inside Soap magazine, Simon said: “Our idea is that they win the lottery!

“With the money, Tracy would get massive knockers, and Steve would get some of those white Rylan [Clark-Neal] teeth that you don’t know he has until he orders a beer.

“And they’d drive everywhere in a convertible Bentley – even from Dev’s to the Rovers.”

Kate added: “And they’d think they are better than everyone else, asking for a Chateauneuf-du-Pap in the Bistro, until they lose everything and have to grovel their way back in.”

Read more: Corrie’s Shona fights for her life as David fears the worst

And Simon and Kate have even gone so far as to act out some of the fictitious plot in between shooting real scenes.

They’d go under the knife together as a couple, because it would be cheaper.

When asked how they came up with the storyline, Simon replied: “We just started talking, and even started playing bits of it out.”

Kate took things one step further and decided to get the hair and makeup team involved in the elaborate plot.

She explained: “I even asked them in make-up how long it would take for them to put in big fake lips!

“You know, like with Alan Partridge, when his lips swell after an allergic reaction.”

Simon added: “They’d go under the knife together as a couple, because it would be cheaper.

“Except Steve comes out with the massive knockers, and he has to have false breasts for a while!”