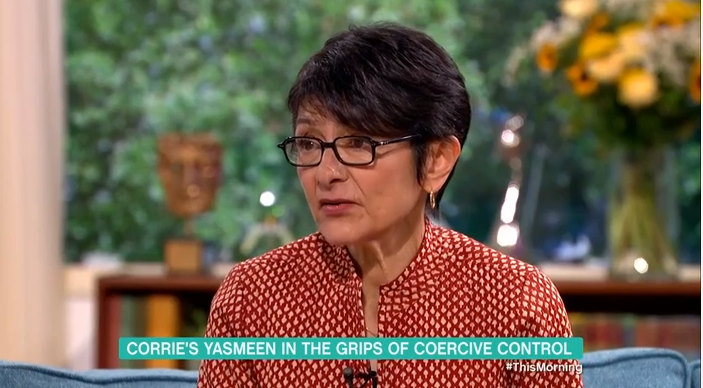 Coronation Street’s Shelley King has revealed the Geoff and Yasmeen abuse storyline will last a year.

Earlier today Shelly, who plays Yasmeen Nazir in Corrie, appeared on This Morning with Ruth Langsford and Eamonn Holmes to talk about her abuse storyline.

On the show, when was asked if she feels responsibility to do the storyline justice, Shelly said: “I think it’s very important.

“I think soaps and in particular Coronation Street historically has explored many controversial issues because we have a duty of care to the public. It’s in our homes.”

“I think Ian and I have a great responsibility, and Ian the producer, we have a responsibility to talk to people and to create a believable and understandable and truth-based storyline and that’s what we’re doing.”

“The good thing is we can’t be scared of being unpopular as actors or anything like that.

“Because we come into the home, I mean Barty is the nicest man, we get on so well, I was telling you earlier we have the humour of a 14-year-old boy and we will not give it back.”

“So if we didn’t trust each other, we would not be telling the story in an adequate way. What you see will become brutal and not physically brutal, but mentally brutal which is even worse in a way.”

Shelley revealed that the storyline is going to be “long term”.

She added: “And it’s a long term one [storyline] and that’s the good thing about it.”

Sally then specified, saying: “It’ll go on for about a year in little bits.”

A couple of weeks ago, Yasmeen had precious items stolen from her home including a photo of her son Kal who died a few years ago, a bracelet given to her by her ex-husband and a necklace from Geoff.

Although everyone suspected Ryan’s DJ friends, it turned out that Geoff was the culprit and sold Yasmeen’s sentimental possessions, ripping up her photo of Kal.

That same week Yasmeen had been mugged on the street and afterwards, Geoff guilt tripped her into staying home and got upset when she spent time with granddaughter Alya and her friends.