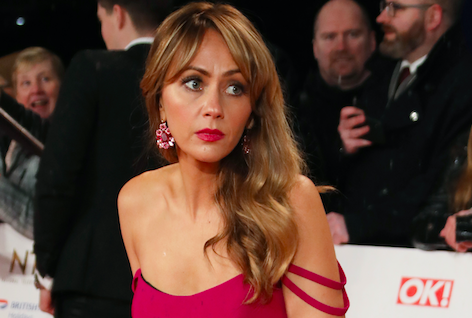 It's a case of the green-eyed monster!

Samia Longchambon is “furious” with her Coronation Street co-star Kym Marsh – and it’s all because of her brand new film role.

Although Michelle Connor is still in Weatherfield, actress Kym filmed her last scenes in November and is currently moving on with her career.

The soap star and former Hear’Say singer has landed a role in the film The Loss Adjuster, where she’ll be playing the wife of the main character Martin Dyer.

And, drum roll please, Martin will be played by Bros star Luke Goss!

Luke is the lead in the film and I play his wife… Samia is furious with me because of it.

In a recent interview, Kym admitted that Samia – aka Maria Connor – can’t believe Kym is lucky enough to be playing Luke’s wife in the film because they were both such big fans of his band when they were younger.

Kym said: “Luke is the lead in the film and I play his wife… Samia is furious with me because of it.

“We were both huge Brosettes back in the day and, when I met Luke, he told me he’d been desperate to meet me so he could look into my eyes.

Dame Joan Collins also stars in the film but Kym doesn’t share any scenes with her.

She said: “I haven’t been able to film with Joan directly, which is a shame, but I’m so proud to be involved in it.

“Martin Kemp is in it, too, and I filmed a scene with Cathy Tyson, which was incredible.”

The film, set for release next year, follows hapless insurance loss adjuster Martin, who feels his life is spiralling out of control until he discovers silver lining.

Kym, who only finished filming the ITV soap last month, admitted it still hasn’t sunk in that she’s left the show.

“The week leading up to my final scenes was so hard, I was overwhelmed.

“I had a great party. Everyone from the cast and crew came and it was lovely but it hasn’t hit me yet because I’ve been so busy.”

However, Kym – who is currently starring in the stage version of Elf – vowed she’d be back as Michelle Connor one day.

She said: “I see this as a break. I don’t see it as me saying goodbye to the Street.

“I love the character and I love the show and it’s definitely not the end of Michelle.

“I wouldn’t want to shut the door on her but there’s no set plans right now for me to return.

“There’s no timescale but one day I’ll be back.”

In upcoming scenes, Michelle is furious when she discovers who really bought the Bistro off her…

Will you be sad to say goodbye to Michelle Connor? Leave us a comment on our Facebook page @EntertainmentDailyFix and let us know what you think!