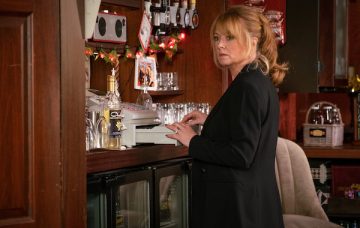 She wrote on one of her cast cards

in an Instagram post, Sally took a picture of one of her cast cards, which is usually signed by the actor who plays the character.

However, it seems that Lucy had got hold of this one…

When @lucyfallonx sits in your spot and defaces your belongings. Whippersnapper x

On the cast card was written: “I smell like mucus love Sally Ann.”

Sally captioned the Instagram post: “When @lucyfallonx sits in your spot and defaces your belongings. Whippersnapper x.”

Fans loved what Lucy did and found it “hilarious”.

Many fans commented laughing emojis and one commented “Hilarious! Xx” 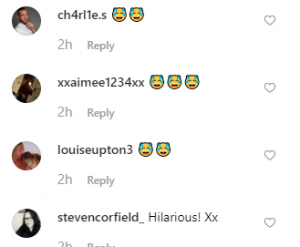 She arrived back in Weatherfield in 2015 and began a relationship with Kevin Webster.

However, their relationship ended after she attempted to kidnap his son Jack. It was revealed that Jenny’s son Tom drowned in a paddling pool a couple of years before.

In 2016, she began a relationship with Johnny Connor and they eventually got married and bought the Rovers.

Johnny lashed out at Jenny and ended up cheating on her with Liz McDonald.

Jenny eventually learned the truth and even started tracking Liz’s phone to see if they were seeing each other behind her back.

After drinking heavily, Jenny ran over Liz at Christmas. Although they were set to go to court, Liz decided not to testify against Jenny and left Weatherfield for a while.